This is Ken Ham, and our 510-foot-long Noah’s Ark is open in Northern Kentucky. 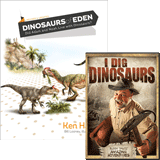 Yesterday we learned dinosaurs were created on the same day as Adam and Eve. Of course, this means dinosaurs and man once lived together. But wouldn’t fierce dinosaurs—like T. rex—have been a terror in the garden of Eden?

Well, Genesis one tells us that—originally—God gave people and the animals the plants to eat, not animals. This means T. rex originally would’ve been snacking on fruits and plants. But wait—what about their huge teeth?

Well, just because something has big teeth doesn’t mean it eats meat. Even today, fruit bats and pandas both have sharp teeth—but they eat fruit and bamboo.

It wasn’t until after sin that creatures started eating meat.