“For in Six Days”

This is Ken Ham, head of the ministry that built a full-size Noah’s Ark south of Cincinnati. 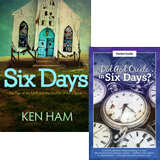 Yesterday we learned that the context in Genesis chapter one makes it clear that the days of creation were ordinary days. But there’s another place in the Bible that makes this obvious. One of the Ten Commandments God gave Israel was “honor the Sabbath.” They had a seven-day week, with six days of work and one day of rest. Now, that’s because God created in six days and rested for one. God didn’t work for millions of years and rest for a million more. Exodus twenty says, “For in six days the Lord made” everything.