This is Ken Ham, on a mission to call the church back to God’s Word and the gospel. 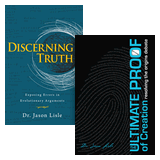 Evolution predicts huge amounts of change over millions of years, as one kind of creature supposedly evolved into another kind. But the fossil record shows lots of examples of organisms staying the same, even over supposed long ages.

For example, last year scientists found a lily fossil in Brazil. Now, this lily was supposedly millions of years old, but it looked just like a lily! It had all the features lilies have today. No evolution had happened!

And how do you preserve a delicate lily? Well, you have to bury it quickly! And the global flood of Noah’s day could do just that!

This lily is evidence of a catastrophic flood thousands of years ago!