This is Ken Ham, president of the Noah’s Ark attraction, the Ark Encounter, south of Cincinnati. 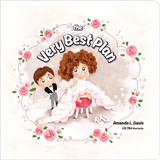 You know, when Jesus was asked about marriage in the context of divorce, he answered, “He who created them from the beginning made them male and female.” And he added: “Therefore a man shall leave his father and his mother and hold fast to his wife, and the two shall become one flesh’?”

Did you know His response was to quote from Genesis and the creation account!

Many people say Genesis isn’t meant to be taken as history, so why did Jesus? He even said that from the beginning, we’ve been created male and female. But evolution teaches humans arrived billions of years after the beginning.

Genesis is history because that’s what God’s Word teaches and Jesus affirms this.