What Happened to the Dinosaurs?

This is Ken Ham, author of the books The Dinosaurs of Eden and D Is for Dinosaur. 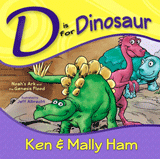 We know dinosaurs were on the ark with Noah because he was told to take two of every land animal with him. And that would include dinosaurs. So what happened to them?

Well, they likely died out due to human activity, climate changes, habitat loss, and more. Animals go extinct all the time for the same reasons. And the world after the global flood was a very different place!

Dinosaurs aren’t a great mystery when you start with God’s Word. We find their fossils because they were buried during the flood. Those who survived on the ark, well, they eventually died out too, along with all the other creatures that had become extinct.