How Should We View Dinosaurs?

This is Ken Ham, inviting your family to visit the Creation Museum, near Cincinnati. 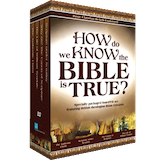 Last week we looked at fossils—according to a biblical worldview. This week we’re going to do the same thing with the most famous ones of all—dinosaurs!

Well, as we show inside our Creation Museum, what you believe about the past determines how you interpret the evidence. Two different starting points means: two different interpretations.