Were Dinosaurs on the Ark?

This is Ken Ham, CEO of the ministry that built a full-size Noah’s Ark south of Cincinnati. 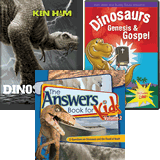 Many people wonder if dinosaurs were on the Ark. Well, let’s look and see what the Bible says.

So why do some people wonder about dinosaurs? Because we’ve been so influenced by an evolutionary worldview, we often have a hard time thinking biblically. We’ve been brainwashed to believe that dinosaurs lived millions of years ago, long before man.

But that’s not the history we find in God’s Word. God created everything just a few thousand years ago—and that includes what we call dinosaurs!