This is Ken Ham, a publisher of the award-winning family magazine called Answers. 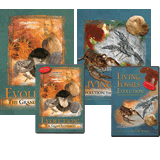 If something vanishes from the fossil record, evolutionists assume it went extinct. But the Lazarus group call this timeline into question by proving it isn’t accurate.

So how can we explain this from a biblical perspective?

Well, the Bible provides a simpler explanation. Creatures were buried during the global Flood. It is not surprising if we find fossil creatures alive and well today.