When God created the first man and woman, He made them different from the animals (1 Corinthians 15:39). He created Adam out of the dust of the ground and Eve out of Adam’s rib. God created man and woman in His image (Genesis 1:26–27). They were able to fellowship with their Creator God. When we carefully study the Bible, we learn that God took six days close to 6,000 years ago to create all the original kinds of plants and animals, the whole universe—the sun, moon, and stars—and Adam and Eve. Everything was perfect, and God called all He had created “very good” (Genesis 1:31, Deuteronomy 32:4).

Now, the animals that we see in museums do not look exactly like the animal kinds that God originally created on Days 5 and 6. Why? Glad you asked! 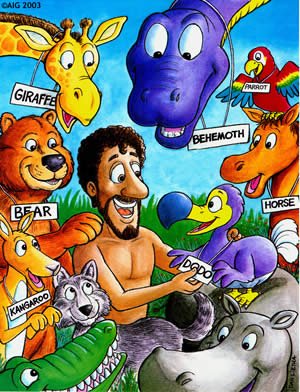 On Day 3, God created the various plant kinds, and on Days 5 and 6 He created the various animal kinds. What is an animal (or plant) “kind”? Most likely, a kind represents a group of animals that can mate with others in that group. It is not necessarily the same grouping as the “species” designation that we use today.

For example, lions, tigers, jaguars, and leopards are classified as different species, but are probably all members of an original cat kind. And donkeys, zebras, Thoroughbreds, and Arabians are probably all part of one of the original horse kinds. Some have suggested that there may have been as many as 50 different dinosaur kinds. For example, the ceratopsian kind might include triceratops, monoceratops, etc.

What did these original kinds look like? We don’t know for sure. But the representatives of each kind that survived the Flood had enough information in their DNA to produce the wide variety of animals that we see today. (DNA is the molecule inside the body’s cells that stores the genetic information that determines the growth and development of that organism.) For more information on the original kinds, see www.answersingenesis.org/go/kinds.

After God created Adam and Eve, He told them to be fruitful and multiply (Genesis 1:28) and to have dominion over the creation (Genesis 1:26, 28). They were to tend the garden and to eat from its produce. They were also to care for the animals. God owns the earth (Psalm 24:1), but He has asked us to be responsible stewards of His creation (which is now suffering from the Curse). We can do this in many ways (for example, by not littering or polluting our air or water unnecessarily). Stewardship can be taken to an extreme by placing the animals over humans, but we need to be careful to avoid this mentality. Man is God’s special creation, since we were created in God’s image (Genesis 1:26–27). Let’s all do our part to be good stewards of the world that God gave us so that others can also enjoy it.

Previous Article What Is Science? Next Article Corruption (The Fall)