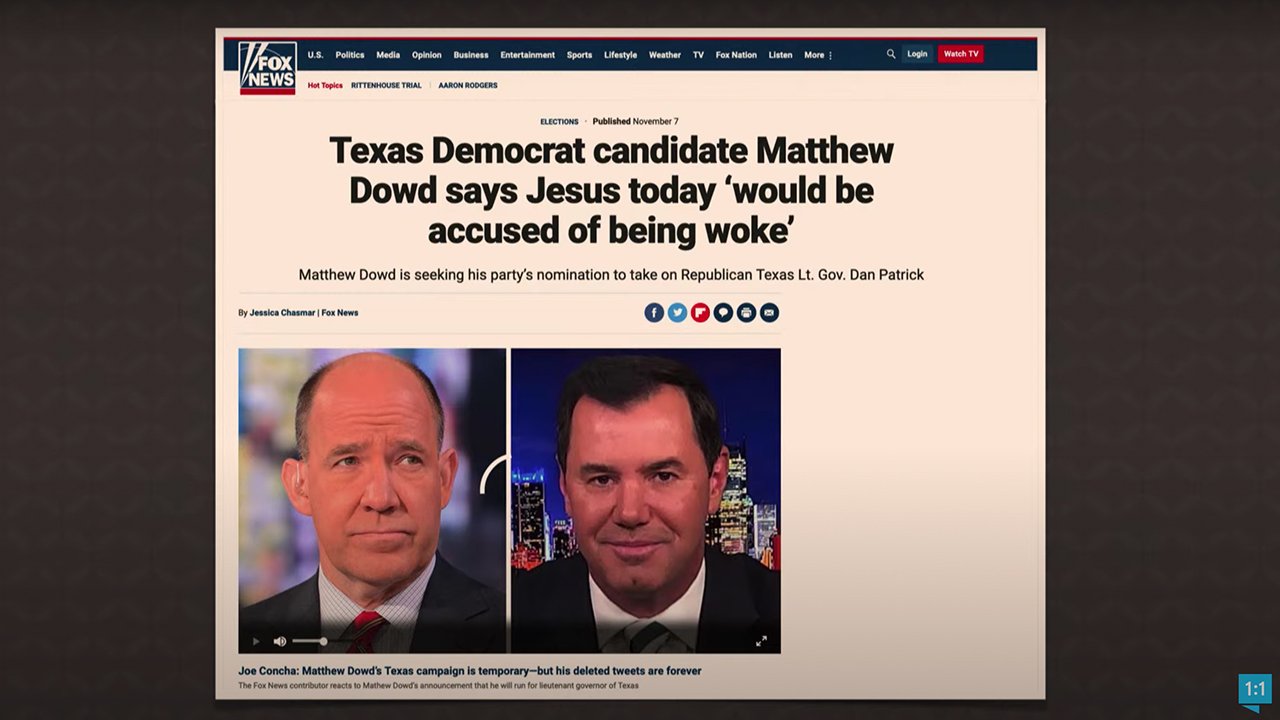 Would Jesus be declared “woke” by political conservatives if he came to earth today, instead of 2,000 years ago? According to a recent tweet, the Democratic lieutenant governor hopeful of Texas, Matthew Dowd, believes so. Is Dowd right? Is Jesus “woke”?

Well, “woke” means many things today. In his tweet, Dowd appears to define it with the following statement:

How about we just say it is human decency to treat all with respect and dignity and that it is constitutional to say all men and women are equal.

Now, in his tweet he’s basically defending being “woke” as thinking like Jesus thinks and treating everyone with “respect and dignity.” Of course, that’s not how most people are using the term “woke.” Generally, it refers to being “awakened” to the so-called “issues of our day,” such as presumed LGBTQ rights, abortion, CRT, and so on. Dowd’s tweet is an example of the common practice of those who don’t really know or believe Christ and the Bible, using the Bible or Christ to affirm whatever they want!

When we look to God’s Word, we see that Jesus taught against many of the teachings of his day, particularly the false, self-serving doctrines and practices of the religious elites of his day. Often he did this by teaching from the Scriptures and showing them their error and sin. And he would do the same today—indeed he is doing so each and every day through his eternal, unchanging Word!

So, we don’t have to wonder if Jesus is “woke.” Jesus, who is God, gave us his Word, filled with everything he wants us to know about who he is, who we are, what he has done for us, and what he expects of us. And much of what he taught is upside down to what our sinful hearts expect or want—and that certainly includes today’s “woke” crowd.

So, no, Jesus wasn’t “woke” by any definition of the term. And, frankly, it’s irrelevant today—Jesus was accused of being demon-possessed (Mark 3:22) and more on earth because people didn’t want to believe he is who he said he was: God the I AM, the Creator, the Judge, and the Savior.

Really, Dowd and the “woke” crowd need to judge what they believe against the absolute authority of the Word of God! That’s the only way we can know the Truth that sets us free.

This item was discussed today on Answers News with cohosts Patricia Engler, Dr. Jennifer Rivera, and Bryan Osborne. Answers News is our twice-weekly news program filmed live before a studio audience and broadcast on my Facebook page and the Answers in Genesis Facebook page. We also covered the following intriguing topics:

Watch the entire episode of Answers News for November 22, 2021.