Staying a Strong Christian in College: A Zookeeper’s Story

Staying a Strong Christian in College: A Zookeeper’s Story

An audible gasp rippled through the room as every head turned to see the newcomer. I turned as well, soon finding myself face to feathered face with an Eurasian eagle owl.

“This is Luna,” the zookeeper at the front of the room introduced the star of the Animal Encounter show. But as stunning as the owl was, I hadn’t only come to the Ark Encounter to meet the animals.

Once the show and following program ended, I headed to find Karina Altman, the presenter who had been handling Luna. It wasn’t every day I could interview an experienced zookeeper who could also speak to being a Christian student at a secular university. I’d documented Christian students’ experiences in multiple countries during my earlier travels—but never here in America. Would the strategies that help students in other countries appear here as well?

There was only one way to find out.

“Come on in,” Karina invited as I stepped into her office. From the Animal Encounters calendar on the wall to the “finger-painted” canvas displaying a menagerie of hoof-, tail-, and noseprints above the desk to the live green mealy Amazon parrot (Enoch) perched on a table beside me, I could certainly tell I’d landed in a zoo office! 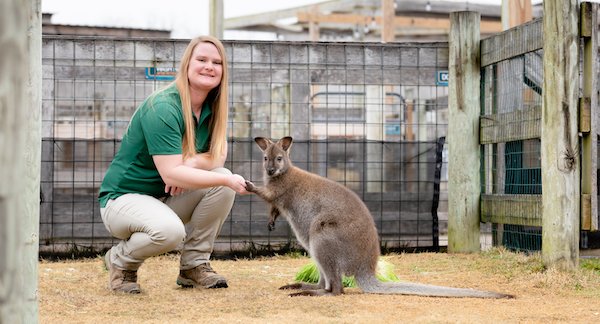 Karina with Boomer the wallaby

“Thank you so much for being down to chat,” I said, pulling up a chair next to the parrot. “First off, what’s your role with Answers in Genesis?”

“Officially, my title is animal presenter,” Karina answered, “I do all the shows, programs, workshops, classes, outreach—anything that has to do with educating the public about animals.”

Along with overseeing the Ararat Ridge Zoo’s collection of “Animal Ambassadors,” Karina also runs the zoo’s social media pages, hosts video programs about the zoo for Answers.tv, speaks and writes for Answers in Genesis, and has written a soon-to-be-released book called Amazing Facts About Animals.

“Do you have a favorite part of what you do?” I asked.

“The best part is working with the animals. I've always wanted to be a zookeeper,” she said. “I’ve been in the zoo field now for 15 years, forming relationships with the animals and getting to work with so many unique species.”

But Karina isn’t only enthusiastic about animals. “My other passion is apologetics,” she told me. “So, it worked out really well that I ended up here, and now I’m doing a perfect blend of my two passions.”

“That’s awesome,” I said. “I love to see how God designs people with certain ‘likes,’ passions, and giftings, and then puts people in places where they can use them. Do you have a favorite animal that you work with or that you think has an especially amazing design?”

“I have a couple of favorites—” she began.

“Did he just sneeze?” I asked.

“He did,” Karina laughed, “that was a parrot sneeze.”

Well, then. In all my prior travels, I’d never had an interview interrupted by a sneezing parrot. But Karina continued unphased.

“Luna right there,” she said, pointing to the owl’s picture on her desk, “is one of my absolute favorites. So is CJ, one of the camels. And then, there are snakes. I love snakes! I have a huge passion for them for changing people's perceptions about them.”

“Wow,” I said. “Well, we’ve talked a little bit about your story. But how did God lead you to study science and go into apologetics?”

“I grew up in a Christian household,” she said, adding that as a kid, she loved reading and learning. “I would go to church, memorize Scripture, and learn about the Bible. But then I’d go to school or read encyclopedias about animals and dinosaurs. And I learned all about evolution.”

At first, Karina didn’t see a problem with these evolutionary messages. But the eighth-grade science teacher at her Christian school soon changed those perceptions.

“He was the one who opened my eyes to the fact that evolutionary history and Genesis can't both be true,” Karina said. “It blew my mind!”

Over the following years, Karina soaked in apologetics teaching, whether through the teacher’s science classes or the Answers magazines he introduced her to. “I’d just absorb as much of it as I could,” she said, “and then I would come home and talk about it.” As a result, her entire family became biblical creationists!

Having decided to study marine biology, Karina began volunteering, working, and interning at aquariums and animal shelters while attending a secular college. She spent several years after graduation working at secular aquariums and is currently pursuing a master’s degree through a secular university. Clearly, Karina is no stranger to living as a Christ-follower in secular settings!

“What were some challenges of being a Christian at a secular college?” I asked.

“Oh, there are many,” she answered. “The number one question I get after my lectures is from parents whose kids want to go to secular schools and who want to know how I handled it. I always tell them, ‘You need to go in with strong foundations because you're going to be challenged. You’re going to be surrounded by dissenters who are going to try to change your mind. And if you don't have a solid foundation—if you don't have a solid relationship with God, it's very easy to get sucked in through their arguments and peer pressure.’”

“What other advice would you give Christians starting college?” I asked.

“Figure out who you are as a Christian,” she answered. “Learn your Scripture. Be prepared. It's not going to be easy. I also think it's good to find a few good, close, core people who share your beliefs.”

While these like-minded Christians might not be easy to find, Karina encourages students to seek them diligently.

“They are there,” she said. “They’re also looking for people like you. That’s why it’s good to advertise what you believe without flaunting it because there might be someone else who’s a Christian but who’s afraid to say anything. So, definitely find your people. And don’t slack off on your Scripture study or time with God.”

Absolutely, I agreed. These excellent bits of advice highlighted students’ need for the spiritual and interpersonal foundations I’d heard so many other Christians emphasize. And as Karina knows from firsthand experience, one way that students can strengthen both these foundations is to be discipled by older Christians.

“It's good to have a Christian counselor, therapist, or mentor,” she said. "For me, that was my eighth-grade science teacher.”

By introducing her to apologetics, this teacher also helped equip Karina with the intellectual foundations she needed for speaking up strategically in college.

“I have found the best strategy is not to just spew the evidence for your beliefs,” she noted. “As we teach a lot here [at Answers in Genesis], we all have the same evidence, and it can be interpreted in different ways based on our worldviews. So, I studied a lot of logic, learning logical fallacies and how to ask pointed questions.”

By asking questions to get her professors and classmates thinking, she was able to gently point out the inconsistencies in their worldviews.

“You can make your beliefs and stance known without being obnoxious,” Karina said. “Just be a witness. And listen to the Holy Spirit. It's not your job to change people's minds but to get them thinking. Just plant the seed.”

“Amen,” I said. “What were some other positives of being a Christian in that environment?”

In response, Karina explained how a benefit of studying at a secular university—assuming students have the foundations necessary to survive it—is becoming familiar with evolutionary arguments.

“If you are prepared and you have the foundations, it's really good to know [the other side]. A lot of people say, ‘Well, you don't even know what I believe. So, how can you argue with me?’ So, it’s good to be exposed to what others believe—to learn what their logic is, what they're thinking, what their arguments are. Then you can know how to talk to them better.”

However, students must realize that this process won’t be easy.

“It's absolutely hard,” Karina emphasized, “But I don't think people should be afraid to go to a secular college. It teaches you how to rely on God more—how to trust in him, follow him. You just have to be prepared. God says we're going to be persecuted.1 You’re going to get made fun of. You’re going to get mocked. And so, you have to be ready for that. But it's okay. It's just a short-term thing.”2

By now, I had probably nodded YES! enough times to resemble a small porcelain bobblehead—or perhaps, a sneezing parrot. Right down to the importance of mentorship, everything Karina had been saying lined up incredibly well with themes I’d heard from interviewing Christian students across other cultures.

“Just out of curiosity,” I asked, “have you heard any of my spiels on what I found from Christian students around the world?”

“Nope, I was hoping you would answer that way!” I replied, remarking how it only makes the case stronger if she hadn’t heard what students in other cultures have said but is confirming the same themes they did. Whether around the world or in America, Christian students consistently emphasize the need for strong spiritual, intellectual, and interpersonal foundations. So, the need for churches and families to equip students with these foundations also rings true—or should I say, rings as emphatically as a parrot sneeze.

For top practical tips on how to build strong spiritual, intellectual, and interpersonal foundations, see the new book, Prepare to Thrive: A Survival Guide for Christian Students, available at bulk discounts to help equip as many students as possible.