What we teach our children about God and his Word is vital for shaping their attitude towards the Scriptures. Will they view the Bible as authoritative in every area or as flexible: bending and adjusting to cultural whims and the thinking of our day? While ultimately each person makes their own choice about God and his Word, parents need to be faithfully discipling their children to produce the fruit of a biblical worldview in them and in their thinking.

Now, Scripture claims to be both perfect (infallible) and authoritative—so we should want our children to have the first view I mentioned (i.e., the Bible is authoritative in every area). For example, just consider a small portion of Psalm 119 (the longest Psalm and one that extols the value and authority of God’s Word):

How can a young man keep his way pure?
By guarding it according to your word.
With my whole heart I seek you;
let me not wander from your commandments!
I have stored up your word in my heart,
that I might not sin against you.
Blessed are you, O Lord;
teach me your statutes!
With my lips I declare
all the rules of your mouth.
In the way of your testimonies I delight
as much as in all riches.
I will meditate on your precepts
and fix my eyes on your ways.
I will delight in your statutes;
I will not forget your word. (Psalm 119:9–16)

If we want our children to see Scripture that way, we must teach them that the Bible is the ultimate authority in all areas and that we use God’s Word as the foundation for our thinking.

See how much the psalmist (inspired by the Holy Spirit) loves God’s Word and sees it as the authority over his life? If we want our children to see Scripture that way, we must teach them that the Bible is the ultimate authority in all areas and that we use God’s Word as the foundation for our thinking.

So, here’s what you don’t do if you want to teach your children that! You shouldn’t publish (or use!) books for children that undermine the authority of God’s Word by teaching ideas that contradict the clear teachings of Scripture. Here’s what I mean. Several Christian publishers recently published books for kids that feature evolutionary teaching. Some of these books add a “God did it” type of message; others were basically atheistic evolutionary texts!

One book, a book of science and nature facts for children, had a whole spread on the evolutionary formation of stars, with a small passage stating that God “decided how many stars there would be in the sky, and gave each one a name.” This is very different from what Scripture states: “[H]e made the stars also” (Genesis 1:16, emphasis added).

Another book can be found on dinosaurs for kids that is filled with evolutionary teaching and millions of years, even teaching children such concepts as “convergent evolution” (part of “God’s evolutionary processes”) when explaining why “on the animal tree of life” some creatures look similar but aren’t related.

Another religious publishing house—“deeply rooted in the historic Christian tradition, [and] ecumenical in spirit”—published a book that calls humans “animals,” saying “we are still human animals like the people before us,” while another book from the same publisher describes itself as “a lyrical, spectacular history of the ocean—from its dramatic evolutionary past to its marvelously biodiverse present,” stating “now the sea teems with all kinds of animals—squid, turtles, dolphins, barracudas, even glowing fish, all living in the waters where long, long ago, life itself came to be.” In the descriptions for both of those books from a religious publisher, God isn’t mentioned whatsoever.

It's very discouraging to see books marketed towards children that teach them to reinterpret God’s Word in light of man’s ideas (which is really teaching that man—not God—is the authority).

It's very discouraging to see books marketed towards children that teach them to reinterpret God’s Word in light of man’s ideas (which is really teaching that man—not God—is the authority). Such teaching has had a dramatic effect on the church, resulting in a massive generational loss of young people who don’t believe God’s Word or see it as irrelevant to the world around them. These kinds of resources certainly won’t help with that!

Perhaps these publishers think that teaching children evolution alongside the Bible will make the Bible’s teachings more palatable in our supposedly “scientific” age. But the entire premise of such thinking is wrong for at least two reasons:

Like those Christian publishers, we want to reach children. But we want to teach them to start with God’s Word as the foundation for their thinking. We want them to understand that science confirms God’s Word from the very first verse. Our desire is to see them “honor Christ the Lord as holy, always being prepared to make a defense to anyone who asks you for a reason for the hope that is in you” (1 Peter 3:15). We want them to know that God’s Word can be trusted and therefore the gospel message can also be trusted!

I encourage you to use Answers in Genesis resources in your homes and churches, with your kids and grandkids, to help you lay that vital foundation that God’s Word is the authority and it is true. You can find a whole host of wonderful books for children at AnswersBookstore.com, such as: 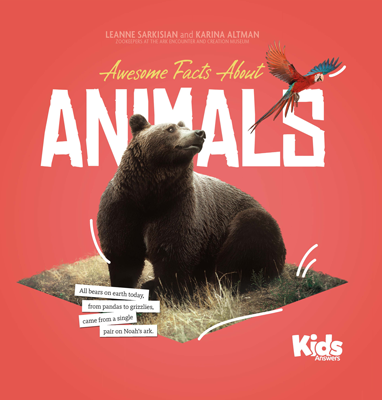 And I thought you’d enjoy a recent letter I received from a child (I love getting these letters and receive many each week) who loves our Kids Answers (a 32-page magazine for kids that comes free with your Answers magazine subscription) and other resources:

We’re so thankful for the impact that the resources we produce are having on children. Praise the Lord!