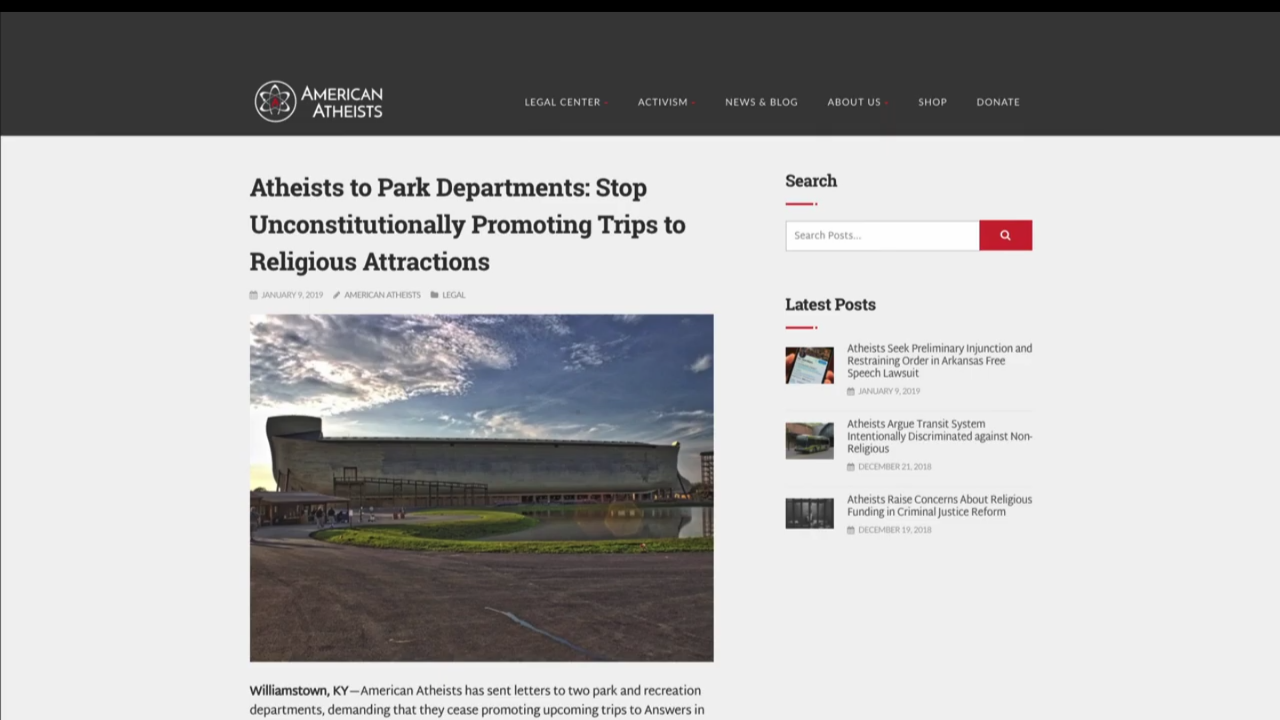 Following the Freedom from Religion Foundation’s most recent attack on freedom of religion in America, the group American Atheists has now launched an attack on those who organize tour groups that come to our Ark Encounter and Creation Museum that are arranged by parks and recreation departments around America.

Earlier this week, the FFRF threatened public schools in an effort to bully them not to send public school classes to visit our two Christian facilities. Following suit, the American Atheists, another anti-Christian activist organization, has sent threatening letters to two parks and recreation departments “demanding that they cease promoting upcoming trips to Answers in Genesis’ Creation Museum and Ark Encounter.”

Parks and recreation offices in various states often sponsor tours to a variety of well-known attractions—which the attendees themselves pay for—and sometimes those tours will include stops at the Ark Encounter and Creation Museum. However, due to threatening letters from the FFRF to such parks and recreation officials, two groups (one in Illinois and one in Virginia) have cancelled their planned Ark trips. The American Atheists are now jumping on the anti-Christian bandwagon as they follow FFRF’s public school threats. With their own efforts, AA’s threats are nothing less than tortious and malicious interference with the prospective business relationships of these sponsored tours and AiG’s tourist attractions.

Local governments are in no way endorsing the Ark or museum by arranging these trips.

With these parks/recreation-organized trips, local governments are in no way endorsing the Ark or museum by arranging these trips. They are simply organizing tours that visit our attractions as well as others. Yet secular activists are treating Christians and their facilities as second-class citizens in America. Just because something is Christian doesn’t mean groups associated with government departments can’t visit them. The claims and actions by the American Atheists and Freedom from Religion Foundation are as ridiculous as they are unconstitutional. As long as the government doesn’t say, “you have to believe what you see or read at the attractions,” there is absolutely nothing unconstitutional about including the Ark and museum in their tours. Besides, the attendees themselves pay for the tours—the government does not.

These latest attacks on freedom of religion in America are just part of an ongoing, increasing onslaught by atheists in America to try and restrict religious freedom and to impose their atheistic religion on the culture. In their letter to the park and recreation department they state as much when they say they are “a national nonprofit organization dedicated to the separation of religion and government and elevating atheists and atheism in our nation’s public and political discourse.” People need to understand that atheism is a religion, for atheists have a belief system that teaches that all life arose by natural processes; that there is no God; that people are accountable to no one but themselves; and that they get to determine what is right and wrong. Their whole system is a belief—a religion.

This is just an ongoing, increasing onslaught by atheists in America to try and restrict religious freedom and to impose their atheistic religion.

One of the definitions of religion in the Merriam-Webster dictionary is:

a cause, principle, or system of beliefs held to with ardor and faith.

This certainly defines atheism, including the atheists’ passion. In fact, I wish there would be more Christians who would have the same fervor for their faith as the atheists do for theirs! We pray there will be many more Christians who will courageously stand up for religious freedom and challenge these very devoted religious groups that are trying to impose their religion on everybody. We need to stand up to them!

Previous Article Distressing “State of Theology” Results Released Next Article Where Are the “COVID Babies”?