Reaching Out with Love to Muslims

Every day at AiG, we pray, often have a short Bible study, and then give a few announcements. Recently, the entire staff gathered at the Creation Museum to hear a special speaker. 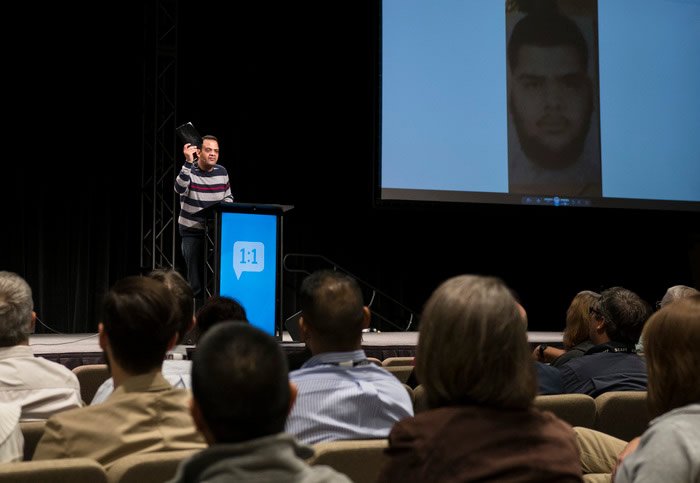 Last week, we had one of the most memorable speakers in recent memory who shared his thrilling testimony with us. Samer Mohammed grew up in a Palestinian refugee camp in Lebanon and was indoctrinated with a hatred for Jews and Christians. He calls himself a former “man of hate,” but today is now a “man of love.” His father worked alongside Palestinian terrorist Yasser Arafat, and Samer was being trained to be an imam (a mosque leader). But something happened along the way—which Samer recounts in the video below—that profoundly changed him, not only theologically but also personally and politically. In the video, he is introduced by our CCO Mark Looy and ministry friend Steve Rawlings of the Rawlings Foundation. (We received Samer’s permission to post this blog and video.)

As we ended the staff meeting, Mark asked the staff, “Now, when’s the last time we had someone with the name Mohammed speak to us?”

AiG has many outreaches to Arabic-speaking people in the Middle East and elsewhere. A lot of this ministry is low profile and not well-known, for obvious reasons, but we often come alongside Christian missionaries who are trying to reach their Arabic neighbors with the message of the gospel. We also produce books in the Arabic language, and last month we sent an AiG speaker to a Middle Eastern nation. In addition, several AiG articles have been translated into Arabic and can be found on a special apologetics website; see my previous blog.

Also, you could learn about another ministry to Muslims run my friend Daniel Shayesteh, a former Muslim (not Arab though, but a Persian man).