Some members of the House of Representatives are working with a well-known atheistic organization, the American Humanist Association (AHA). Now keep in mind the AHA describes their beliefs this way:

Humanism encompasses a variety of nontheistic views (atheism, agnosticism, rationalism, naturalism, secularism, and so forth) . . . .

So why is this group working with some US congressmen?

Because they want Congress to pass a resolution to celebrate an atheistic religion!

In the past four years, the American Humanist Association has worked closely with members of the U.S. House of Representatives to introduce Darwin Day resolutions. This year the AHA worked with Rep. Jim Himes (CT-04) to introduce a Darwin Day resolution, H. Res. 67, in the House on Feb. 2. Resolutions and proclamations celebrating Darwin Day have also been introduced at the state and local levels. This year, Governor Jack Markell of Delaware and Mayor John Watras of Garden City, New York, have both issued proclamations declaring February 12 as Darwin Day. Other proclamations in cities and states throughout the country are planned through February 12.

Now, of course, they claim that by celebrating Darwin, they are celebrating science! But they are actually celebrating Darwin’s historical science—Darwin’s beliefs about where life came from. And Darwin clearly taught and believed life arose by natural processes—and naturalism is, for all intents and purposes, atheism.

For instance, Darwin stated his belief in the evolutionary tree of life:

The affinities of all the beings of the same class have sometimes been represented by a great tree. I believe this simile largely speaks the truth. (Charles Darwin, The Origin of Species by Means of Natural Selection, or the Preservation of Favoured Races in the Struggle for Life, 6th ed. [London: John Murray, 1872]. )

The intimate relation of Life with laws of chemical combination, & the universality of latter render spontaneous generation not improbable. (Charles Darwin, On Evolution: The Development of the Theory of Natural Selection, ed. Thomas F. Glick and David Kohn [Indianapolis, IN: Hackett, 1996], 70 )

Darwin was born on February 12, 1809. The AHA has been working for the past four years with congressmen trying to get a resolution passed (without success) to celebrate Darwin’s birthday.

For instance, you can see the record that such a resolution was proposed below: 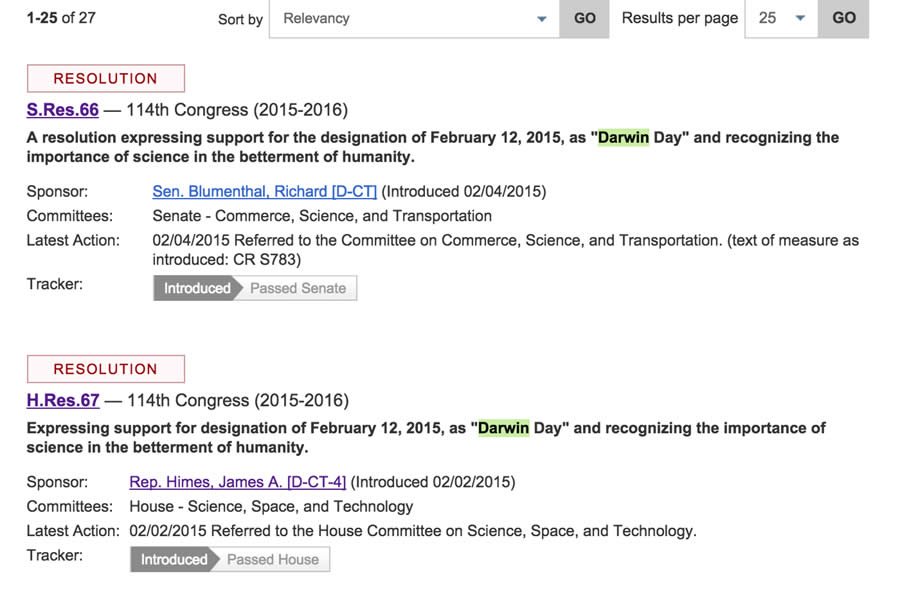 The AHA provided what they said was the text of the actual resolution. Here are some excerpts:

Whereas Charles Darwin’s theory of evolution by the mechanism of natural selection, together with the monumental amount of scientific evidence he compiled to support it, provides humanity with a logical and intellectually compelling explanation for the diversity of life on Earth;

Whereas the advancement of science must be protected from those unconcerned with the adverse impacts of global warming and climate change;

Whereas the teaching of creationism in some public schools compromises the scientific and academic integrity of the United States education systems;

Whereas February 12, 2015, is the anniversary of the birth of Charles Darwin in 1809 and would be an appropriate date to designate as ‘‘Darwin Day’’: Now, therefore, be it Resolved, That the Senate— (1) supports the designation of ‘‘Darwin Day’’; and (2) recognizes Charles Darwin as a worthy symbol on which to celebrate the achievements of reason, science, and the advancement of human knowledge.

Now it is not likely that this resolution will pass. But even proposing such a resolution symbolizes the effect of groups like the AHA and those members of Congress who support them. They want the government of America to establish a religion in this nation (against the First Amendment)—the religion of naturalism or atheism.

All Christians need to wake up and understand that at their core, Darwin’s ideas were proposed to explain life without God. That’s why it is so distressing to see so many Christians claim they can add Darwin’s ideas (really, Darwin’s religion) to God’s Word—thus compromising and undermining the authority of the Word of God.

Really, an apt description of Darwin’s ideas are summed up in this verse:

For although they knew God, they did not honor him as God or give thanks to him, but they became futile in their thinking, and their foolish hearts were darkened. Claiming to be wise, they became fools, and exchanged the glory of the immortal God for images resembling mortal man and birds and animals and creeping things. (Romans 1:21–23)

On Darwin’s birthday, let’s celebrate instead Darwin Was Wrong Day and proclaim this message to the world:

Have you not known? Have you not heard? The LORD is the everlasting God, the Creator of the ends of the earth. He does not faint or grow weary; his understanding is unsearchable. (Isaiah 40:28)

To learn more about Darwin Was Wrong Day and how Darwin's ideas directly contradict the observational science, I encourage you to read this feature article by writer Avery Foley.

Previous Article We Are in a Spiritual War Next Article Agender or a Gender?