“Don’t Confuse Me with the Facts!”

I am observing a double standard in regard to certain people who report on the Ark Encounter receiving Kentucky’s performance-based sales tax refund incentive.

Recently, the Kentucky tourism board granted preliminary approval for the Ark Encounter project to receive the sales tax refund incentive that is used to draw tourist attractions to build in the state of Kentucky and bring millions of dollars of economic activity into the state.

This same sales tax refund incentive has been granted to the Kentucky Speedway. The Speedway receives a refund on sales tax paid within the track (up to a certain maximum amount based on the development cost of the project), as the Speedway brings millions of dollars of tourist money into the state.

A news report in 2010 stated, “The Kentucky Tourism Development Finance Authority has approved incentives for Kentucky Speedway, which is scheduled to hold a NASCAR Sprint Cup race July 9. The approval means the speedway will be eligible for as much as $20.5 million in performance-based rebates during a 10-year period, based on an investment of $82 million, according to a news release Monday.”

Additionally, the Kentucky Kingdom LLLP, which operates an amusement park in Louisville, KY, received approval for up to $10 million in performance-based refund through this program in 2013.

The Kentucky Tourism Development Act states, “This landmark legislation, the first of its kind in the nation, provides a sales tax incentive program for tourism development projects.”

The Tourism Development Act is actually a brilliant move by the state of Kentucky to bring tourism dollars into the state.

The Act does not discriminate against a project just because it has a Christian purpose—and, of course, it would be wrong to do so under the Constitution of the United States.

However, certain authors reporting on the preliminary approval for the sales tax refund incentive granted to the Ark Encounter project are making false claims about it in an effort to malign Answers in Genesis and the Ark project.

For instance, Dan Arel, a freelance writer for AlterNet and Salon.com and blogger for the Huffington Post, stated the following yesterday: 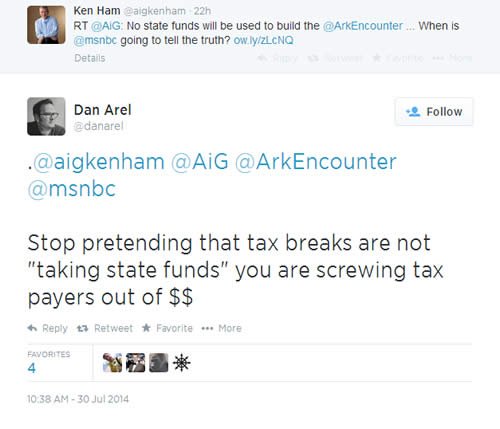 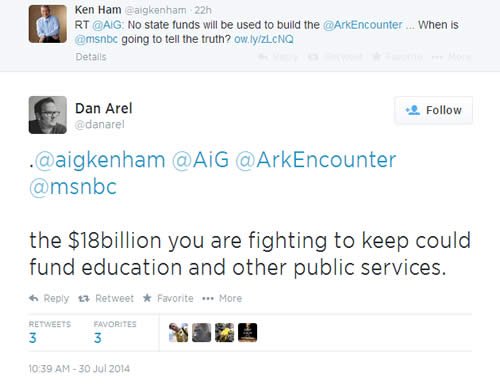 Let’s assume the $18 billion was a typo—as the maximum amount of the refund over 10 years is actually $18.25 million! Assuming the Ark Encounter meets the tourism performance criteria, it would receive a refund on the sales taxes paid only within the Ark Encounter facility up to a maximum of $18.25 million up to a 10-year period. This is the same type of incentive granted to other projects.

Now these tweets imply that this grant will take funds from education and public services. I note that Dan Arel didn’t bring this up about the Kentucky Speedway or other approved state projects.

The State of Kentucky Will Benefit Greatly

The point is, by the government offering this incentive, the state receives a net gain of millions of tax revenue dollars. If, for instance, the Kentucky Speedway or the Ark Encounter built their facilities in another state, the state of Kentucky would not receive the millions of tourist dollars that it now will because of the incentive program. For instance, AiG was considering locations in Ohio and Indiana—but the sales tax refund incentive program certainly made it attractive to build in Kentucky. As a result, the state of Kentucky will financially benefit greatly.

No tax dollars are used to build any of the facilities. After the facilities are built and operational, they qualify to receive a refund on the sales tax generated only within the facilities based on a percentage of the development costs—and based on other strict criteria that ensure considerable dollars are brought into the state.

I’m tired of people like Dan Arel applying a double standard—he says nothing about the other projects that have received this sales tax refund incentive, but singles out the Ark Encounter project and then gives wrong information to try to lead people to falsely believe the project will take funds from the state instead of the true situation, which is: the Ark Encounter will bring millions of net dollars into the state.

Discrimination Against the Ark

So why is the Ark Encounter project singled out by Dan Arel and others like him?

Because the project has a Christian purpose! Dan Arel is a secularist and has written against me and AiG. For instance, just recently, he wrote an article on the well-trafficked Salon.com website regurgitating the false claim that I supposedly stated that “Aliens would go straight to Hell, if they existed.” You can read my response to this erroneous claim.

Arel is against the Ark project and the Creation Museum because they give a Christian message. He doesn’t care that such projects bring millions of dollars into the economy—and his attitude is basically, “Don’t confuse me with the facts.”

Yes—it’s a double standard, and I believe the public will see through his very deliberate attempts to mislead people into believing a lie.

The Creation Museum has brought hundreds of millions of dollars into the economy of northern Kentucky. The Ark Encounter project will bring many times as many tourist dollars into the state economy! However, certain secularists want the state to discriminate against the Ark project because it’s a Christian one.