Something Big Is Almost Here!

For the past couple of months when people walked through the Flood Geology exhibits at our Creation Museum, they saw an area cordoned off with a large curtain—with a sign that reads, “Something big is coming.” Well that “something big” is almost here!

In a staff meeting this week, Doug Henderson, the Creation Museum’s exhibit director, and Dr. Andrew Snelling, AiG’s director of research and staff geologist, gave us an exciting update on “something big” called Ebenezer! Ebenezer, in case you don’t know, is the name of the world-class Allosaurus skeleton that was donated to the Creation Museum by the Peroutka Foundation.

Here is a photo of Dr.  Snelling briefing our staff this week about the significance of the allosaur: 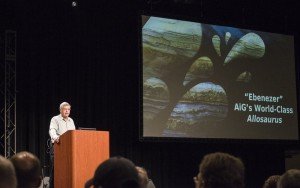 We made the exciting announcement about the donation late last year. This adult Allosaurus was found in 2001–2002 in the Morrison Formation (specifically in northwestern Colorado) with its bones essentially in their correct anatomical positions. The 34-inch-long, 22-inch-tall skull is 97 percent complete. It has 53 curved, serrated teeth averaging 4.5 inches in length. Our research staff shares with me that “of the 60 Allosaurus specimens worldwide, only a half-dozen have such a complete skull. The neck vertebrae were still attached to it when it was found and, unusually, the hyoid bone was even preserved.”

Nicknamed “Ebenezer,” this Allosaurus met his end during Noah’s Flood about 4,300 years ago. Our researchers say, ”He likely tried to flee the violently rising waters surging over the land where he lived, and he was finally swept away and rapidly buried beneath tons of water-borne sediment, explaining the practically undisturbed arrangement of so many of his smaller bones. Ultimately he and every air-breathing animal not on the Ark with Noah died (Genesis 7:22). Biblical history gives us a context for this dinosaur’s death and preservation in what’s called the ‘Jurassic’ portion of the fossil record.”

Now, Ebenezer is almost restored and is being prepared to go on display in the Creation Museum beginning late next week (Memorial Day weekend). Here are some photos of the world-class skull (almost three feet long) as it is being prepared: 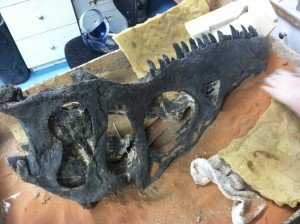 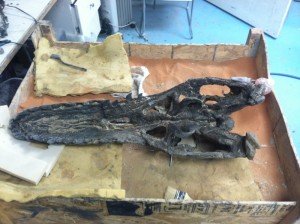 As you can see, the matrix (the dirt and rock) in the skull has been carefully removed. We’re thrilled about the great biblical creationist teaching opportunities Ebenezer will provide in the museum for the thousands and thousands of children and adults who visit.

In fact, we can learn a lot about dinosaurs by examining their skeletons. Dr. Elizabeth Mitchell has written a special report on a study being conducted on the toe bone of another Allosaurus. Her article was our lead piece yesterday on our website.  Dr. Mitchell discusses a discovery that’s left evolutionary scientists “surprised”:

“Chemical ghosts” in a healing Allosaurus toe fracture show the dinosaur’s bone healed the same way as bones in modern vertebrates. Because they believe 150 million years of evolutionary change separates the Allosaurus from us, evolutionary paleontologists are surprised.

“It’s remarkable that the very same chemistry that initiates the healing of bone in humans also seems to have followed a similar pathway in dinosaurs,” says Phillip Manning, senior author of the report published in the Journal of the Royal Society Interface. I encourage you to read the rest of Dr. Mitchell’s article.

And if you haven’t made plans to come visit the Creation Museum to see the new Allosaurus exhibit, I urge you to do so! It opens Memorial Day weekend—and remember, kids under 12 get in free with a paid adult:

This post was written with the assistance of Steve Golden.