Update on Hobby Lobby and Obamacare

Last year, I wrote a blog about the controversy over Hobby Lobby, an arts and crafts retail chain, and its filing against the Obamacare healthcare mandate. Under the mandate, Hobby Lobby is required to offer health insurance that provides abortion-inducing drugs (abortifacients) to its employees.

In the meantime, over 50 briefs have been filed in support of Hobby Lobby! The below infographic from HobbyLobbyCase.com gives more information about the signers of those briefs. 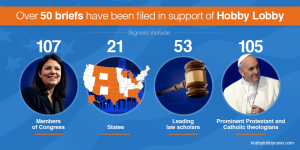 Once the oral arguments are made before the Supreme Court, Hobby Lobby’s case site explains, “A decision should be announced sometime before the end of the court term in June 2014.” Now, Hobby Lobby has been accused of trying to impose its own biblical view of the sanctity of life on its employees by refusing to provide abortion-causing drugs. But actually Hobby Lobby is offering “16 of 20 drugs and devices included in the mandate”—just not the four abortifacients. And Hobby Lobby notes, “the four objectionable drugs and devices are widely available and affordable, and employees are free to obtain them.”

Of course, Christians who value the sanctity of life, as the leadership of Hobby Lobby does, don’t want to see anyone take advantage of drugs that kill unborn children. But Hobby Lobby is not stopping its employees from doing that—they simply don’t want to pay for it. And neither do we at Answers in Genesis, nor should any Christians.

This is a landmark case not just for Hobby Lobby, but also for any Christian-owned for-profit business. You see, our religious freedom in this country—and, more importantly, the life of every unborn baby—is at stake.

I applaud the Green family’s continued perseverance in this controversy. Their stand on God’s Word in this matter has come at great cost to them. As Hobby Lobby prepares for March 25, I urge you to pray for our Supreme Court Justices, that they would make a decision that honors what God’s Word says about the sanctity of human life.

This blog was written with the assistance of Steve Golden.