Before I left for Australia, I was interviewed by a reporter with the well-trafficked website, the Christian Post—after Post editors had noticed that a major Associated Press story was circulating about new attractions at our Creation Museum, especially  the new “Dragon Legends” exhibition. The AP article was appearing on some major websites, from the ABC-TV site to the Washington Post’s, and the Christian Post wanted to go more in-depth about our museum’s view of dragons. The Christian Post piece about the “Dragon Legends” exhibit appeared earlier this week, and the reporter used many of the quotes I submitted. We were grateful for all the coverage.

I thought it would be instructive for my blog readers to read all of the answers I provided the Christian Post, so that they have a better idea of how dragon legends can be connected to the Bible—and even to dinosaurs. I also hope that by reading this blog, you will be encouraged to visit our new “Dragon Legends” exhibition inside the portico of the Creation Museum. And if you have already been to the Creation Museum, the new dragon exhibit is one more reason for you to visit—plus see the other new displays which I also mentioned to the Christian Post. 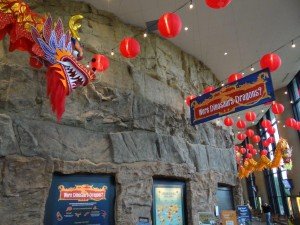 Here is a link to the Christian Post article: www.christianpost.com/news/dragons-invade-creation-museum-in-future-exhibit-102115, and here are the full answers to their questions that I submitted:

Our new “Dragon Legends” exhibition opened Memorial Day weekend this year. It’s one of three new attractions that we unveiled on the 6th anniversary of the Creation Museum. The others were: a world-class insect display we call “Dr. Crawley’s Insectorium”;  we added 20-plus Bibles and Bible-related artifacts to the “Verbum Domini” collection—which is changed out every 6 months—that have been loaned to us by the owners of the Hobby Lobby chain of stores, who are building the Museum of the Bible in Washington, DC.

There are hundreds of dragon legends from around the globe, including those of sea monsters, flying creatures (that we believe could be some of the flying reptiles of the past), and land dragons. With land dragons, biblical creationists believe they resemble certain dinosaurs. Just as there are many legends of huge floods that can be found around the world, there are so many dragon legends that they simply can’t be ignored.  We highlight several of the dragon legends in a large new dragon exhibit inside our Creation Museum. The exhibition, with its spectacular artwork and sculpted items, summarizes many of the world’s dragon legends.  There are just so many of them, like the dragon mentioned in Beowulf,  the numerous accounts of St. George and the Dragon, and so on, that they can't be dismissed as pseudo-scientific. 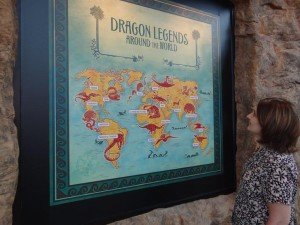 More important than those legends to support the historicity of dragons is what we can learn from the Bible, which I call the “true history book of the universe.” The Bible’s book of Job describes a real creature of the sea that it calls Leviathan. It appears to have been a sea monster, and we believe it fits the description of a dragon in the sea. Job also mentions a large creature called behemoth, a land animal that fits the description of something like a sauropod dinosaur.  Job 40:15–24 describes behemoth as very large, and that it had a thick tail resembling a massive cedar tree. It’s possible that some of the dragon legends could be referring to such creatures that the Bible mentions.

In addition to the dragon legends display inside the museum’s entrance, our new book Dragons: Legends & Lore of Dinosaurs deals with many of these legends. The book suggests that certain land dragons could very well have been what today we call dinosaurs.

For Christians who may be swayed by evolutionary ideas and believe that dinosaurs perished 65 million years ago and thus supposedly never lived with humans, we assert that the Bible’s account of origins is true regarding the creation of the land animals, including dinosaurs, on the same day as humans.  We suggest dragon legends should be examined in this light.  Because we believe the flood legends have a basis in the real historical event of Noah’s Flood as recorded in the Bible, so too are the many dragon legends—they have a basis in real encounters that people had with these animals.  Some of these dragons could have been dinosaurs.

There is other strong circumstantial evidence we can study today for dinosaurs having lived during the past few thousand years. Our science staff points out that a T. rex bone found in Montana had soft tissue and blood vessels preserved inside. That kind of preservation is not consistent with these bones being millions of years old, but is consistent with only a few thousand years.  Such soft-tissue preservation has been found to be more prevalent in fossil bones than scientists realized. We have many scientists on our faculty with earned doctorates, and they find such evidence to be compelling and not pseudo-scientific.

The “Dragon Legends” exhibit is drawing huge media interest. The AP has a story that is now circulating about our new displays, and we just received a call from a news anchor at the Fox News Channel about the displays.

More info can be found at: www.CreationMuseum.org

– Ken Ham To plan your visit to the Creation Museum (right now is a great time to visit, as the summer crowds are going to be behind us soon), and also to discover more about the fantastic zip-line course we opened this summer (and the world class Insectorium), go to www.creationmuseum.org.