Today, on Veterans Day in America,* I wanted to honor a long-time volunteer at AiG and the Creation Museum: Art Hunsicker. Art served in the U.S. Army during World War II and saw quite a bit of action—especially in the famous Battle of the Bulge in Belgium during the bitterly cold winter of 1944–45. Art doesn’t talk much about the experiences of war, including some of the suffering he endured—and also as he saw so much death all around. But if you ask him to talk about WWII, he will. Art can present some personal anecdotes of such remembrances as seeing famous General George C. Patton, though the incident wasn’t all that flattering: Patton—immaculately dressed, including shiny black boots—berated Art’s commander for having dirty boots in one the messiest and dangerous of locations.

Here is a picture of Art with ministry CCO Mark Looy, an avid student of European history and who, in fact, flew over Belgium last Wednesday and—as he looked down below—thought of his friend Art and remembered Art’s service to his country. In the photo, Art points to Belgium on a world map where he played a role in rescuing Europe from Nazi tyranny. On this Veterans Day, our salute goes to you, Art. Thank you for your service—to America and also to AiG! 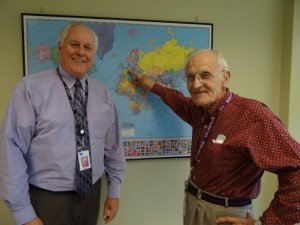 *Since Veterans Day falls on a Sunday, Monday is designated as a holiday for federal employees.

Previous Article Going Down Under Next Article Another Changed Life