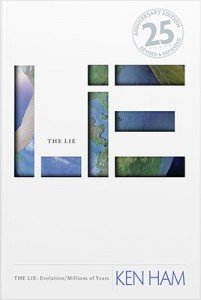 Twenty-five years ago, my  book The Lie: Evolution was published, and God has blessed it over the years. This book has become a bestseller—over 450,000 copies sold! And this year, as I’ve mentioned on my Facebook page already, I decided it was time to update The Lie to make it more relevant to our current age. I even changed the title to reflect the compromise going in within the church, not just with evolution, but also with millions of years. The full title of the book is now called The Lie: Evolution/Millions of Years.

Now, to celebrate the new edition, which is available for preorder in paperback right now, I’ve decided to auction one of my personal copies of the first edition of the 1987 The Lie, along with a special gift package. The winner of the online auction will get the following:

I urge you to visit the auction page above and bid on this unique package. The auction proceeds will go to the evangelistic Ark Encounter project—a full-size, evangelistic Noah’s Ark that we are building south of Cincinnati. (A portion of the winning bid is tax-deductible.)

If you choose not to be part of the online auction, I hope you will consider purchasing the updated and revised The Lie.

Previous Article Thank You for Giving Me Confidence Next Article The Pirates! Band of Misfits