A Heart for Homeschooling

This past week I had the opportunity to be interviewed on the national radio program Home School Heartbeat, produced by the Home School Legal Defense Association. The HSLDA is a nonprofit group that defends the rights of families to homeschool their children.

You can listen to one of the programs, hosted by Mike Smith, HSLDA president, on their website.

The broadcast also promoted our book Already Gone, which shares why so many young people and adults are leaving the church.

Condolences to a Ministry Friend

We extend our condolences to Larry Ross of the Dallas area, upon the loss of his beloved mother, Ruth. Larry has been a key person for us in helping to promote the Creation Museum and the future Ark Encounter all around the world. Here are some excerpts of the tribute he wrote about his mother. I think it will encourage you, but also please pray for the family, as Ruth’s services are being held today.

A Life Well-lived, and a Lord Well-served 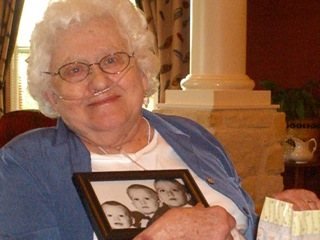 Ruth Hanselman Ross of Lewisville, TX—beloved wife, mother, aunt, grandmother and life-long elementary school teacher—passed away April 8, 2012 at the Medical Center of Lewisville, from complications of a leg injury while in rehab the previous month. Ruth died on Good Friday.

She was born, November 23, 1929 in Elmhurst, IL, to Walter F. and Margaret M. Hanselman. She was raised in Oak Park, IL, where her father, a master wood craftsman, taught shop at Washburne Trade School.

While attending Wheaton College in Wheaton, IL, Ruth was very involved in extra-curricular activities, including serving as Vice President of her senior class, and was graduated with a B. S. in Elementary Education in 1951.At Wheaton, Ruth met and fell in love with Arthur M. Ross from Scotch Plains, NJ, who joined her and her brother and sisters in working summers on the S.S. North American steamship on the Great Lakes. They were married August 15, 1952, and would have celebrated their 60th anniversary later this year.

Ruth began teaching elementary school to help put her husband through graduate studies at Wheaton and seminary in Philadelphia. She continued teaching for 38 years, primarily second grade, while Art was a professor of New Testament at Faith Seminary in Philadelphia and the Wheaton College Graduate School, as well as during his years heading up the college credit division of Moody Bible Institute Correspondence School. She retired from teaching in 1994.

Ruth and Art had three sons, Larry, 58, who lives with his wife Autumn and three sons in Lewisville, TX; Steve, a former missionary pilot who died in 2003 in a head-on small plane crash off the coast of Florida, where he lived with his wife Julie and four children; and David, 53, who still resides in Wheaton, IL. Ruth regularly expressed her joy that each of her grandchildren developed a strong personal faith through a relationship with Jesus Christ.

Though she was an Illinois native, her heart was as big as Texas.

Ruth was revered by all who knew her as a woman of God, who displayed her faith with an optimistic spirit and a grateful heart. “Sweet” and “gracious” commonly accompanied memories and anecdotal stories about her life and legacy. Throughout her life she found inherent enjoyment playing the piano. Though she suffered from rheumatoid arthritis for many years, she loved practicing at every opportunity, most recently playing for her family on Christmas Eve of 2011. A memorial service to celebrate Ruth’s life will be held at 2:30 PM on Saturday, April 14, 2012, at Bent Tree Bible Fellowship.

Previous Article Are You Branson Bound? Next Article Protecting the Message of the Gospel