It’s Not So Parallel!

There was a failed attempt to discredit Answers in Genesis and any Christian who holds to a literal Genesis as they should. Dr. James F. McGrath (Clarence L. Goodwin Chair in New Testament Language and Literature at Butler University, Indianapolis) tried to use the old argument of supposed parallels in the days of creation in an attempt to discredit Genesis as historical narrative. He says the following in a recent blog post:

Take, for instance, the parallels that scholars have identified between days 1-3 and days 4-6 in Genesis 1, illustrated best by using a chart: 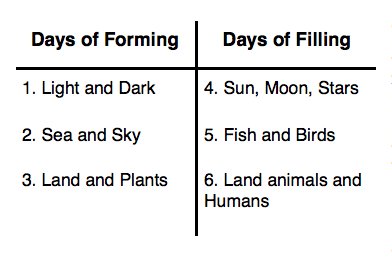 The first three days feature the creation of habitats, and the next three fill those habitats with inhabitants.

Here’s another diagram that highlights the connections in slightly more detail (ironically found on a site trying to dispute the parallelism in the passage!):

Others like it can be found on various web pages as well as in books and commentaries.

Now, let’s see what happens if Answers in Genesis decides that it wants to try to co-opt this into their twisted approach to the Bible and to science: 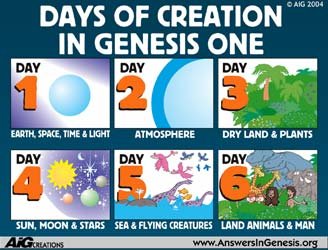 In their attempts to shoehorn science (or rather, their distorted and selective bits of science) into the passage, they make nonsense of the parallels. They not only remove the dome from day 2 (to facilitate their deceitful claim to take Genesis 1 literally in a manner that is not selective), but they focus on the creation of a habitable atmosphere in between the waters above and below on day 2, which leaves one with the impression that the sea creatures on day 5 ought to live in the sky. The Bible’s beautiful structure is treated by them as so much garbage, to be ridden roughshod over in their misguided attempt to hijack Scripture and science for their own twisted ends. Because they are not interested in exploring and highlighting what is actually in Scripture, but in using Scripture for their own ends.

You can read Dr. McGrath’s entire blog item at this link.

By the way, in this one item he uses the following type of language to describe what we believe and to describe our character: “charlatans,” “bizarre attempts,” “twisted approach,” “deceitful claim,” “ garbage,” “hijack Scripture,” “twisted ends,” “misconstrue,” “hypocrisy and lying,” “atheists seeking to do harm,” “foolish,” “misguided,” “sowing misinformation,” and “falsehood and division.” And that is to name just a few! Wow, the language is not very academic at all for a professor, who is obviously very angry at us because we take God’s Word seriously and submit to it.

Well, I thought the best way to answer this twisting of Scripture is to quote from an article by AiG staff writer and researcher, Tim Chaffey (Th.M., M.Div.) and Dr. Bob McCabe (Th.D., Th.M., professor of Old Testament at Detroit Baptist Theological Seminary). They wrote an article about the compromise position of the Framework Hypothesis, which appears in our recent apologetics book, How Do We Know the Bible Is True? In this article they deal with the issue of supposed parallels in the days of creation.

The Two Triads of “Days” argument is a premise that all Framework advocates agree with. Framework supporters claim that the two triads of “days” is a topical parallelism where the topics of days 1–3 are parallel with those of days 4–6. About the parallel nature of days 1 & 4, Mark Futato states, “Days 1 and 4 are two different perspectives on the same creative work.”3 Returning to the overall topical arrangement the entire creation account, Kline writes, “The successive members of the first triad of days [days 1–3] correspond to the successive days of the second [days 4–6].”4 In other words, days 1 and 4 are simply two different ways of stating the same event, as are days 2 and 5, and days 3 and 6. The following chart is representative of that used by many Framework advocates and reflects this topical parallelism.5

At first glance, it may seem as if these writers are on to something. However, a closer look reveals some problems with this argument.First, this supposed semi-poetic construction is inconsistent with the fact that Genesis 1 is a historical narrative. Hebrew scholar Steven Boyd has clearly shown that Genesis 1 is written as historical narrative rather than poetry. Hebrew poetry commonly utilizes a high percentage of imperfect and perfect verbs. By contrast, Hebrew narrative is marked by a high frequency of waw-consecutive preterite verbs that indicate a sequence of events in past tense material. Comparing Judges 4 and 5 shows a good example of these differences. In Judges 4, the account of Deborah and Barak defeating the forces of Sisera is explained in historical narrative. The following chapter is a poetical song describing the same event. The difference in language is readily apparent even in English translations. The same is true with the historical narrative of Genesis 1 and poetic descriptions of creation activities such as those found in Psalm 104. After studying and cataloging 522 texts, Boyd concluded that Genesis 1 can be classified as narrative with a probability of virtually one.6

Second, the above chart is inconsistent with the text of Genesis 1:1–2:3. Water was not created on the second day, but the first. Genesis 1:2 states, “The Spirit of God was hovering over the face of the waters.” This occurred prior to the creation of light on the first day. So perhaps days 1 and 5 should be viewed as parallel. Another problem with this chart is that the “heavenly light-bearers” of day 4 were placed in the “heavens” of day 2 (Genesis 1:14). This is problematic for the Framework advocate who believes days one and four are the same event viewed from different perspectives, because this must have occurred prior to the event described in days 2 and 5. How could the stars be placed in something that did not exist yet?

Third, the order of events is crucial here. The Framework proposes that the days are not chronological, but theological. However, if one rearranges the chronology, then it breaks down into absurdity. The waters of day 1 must exist for them to be separated on day 2. On day 3, the dry land appeared from these waters. The sun, moon, and stars of day 4 were placed in the heavens (expanse, firmament) of day 2. The birds of day 5 flew on the face of the firmament of day 2 and multiplied on the land of day 3. Finally, mankind was made to rule over all of creation (Genesis 1:28). Any attempt to rearrange days of the creation week forces impossibilities into the text.

In the final analysis, the Framework’s reinterpretation of Genesis 1:1–2:3 as a topical account of two triads of days is an illegitimate approach that fails to accurately interpret the creation account.

You can read his entire article on our website.

Page updated December 9, 2019 to restore archived images that were removed from cited servers.

Previous Article Help Stop the Already Gone Phenomenon! Next Article Something Big Is Coming to Homeschooling