Well, I thought I had somewhat “escaped” someone making a big deal of my sixtieth birthday on Thursday. Yesterday morning, the staff gathered in our Special Effects Theater to “harass” me for turning 60. After 20 minutes of the typical sorts of things they do at such “bashings,” I thought that was over. My understanding was that I was having dinner with our kids and their families as a final event for my birthday. How wrong I was!

Unknown to me, family and friends had “conspired” behind the scenes to do something much bigger. While I was on stage at our pastors and Christian leaders’ conference making some announcements, I was interrupted on stage by my brother Stephen who then said, “This is your life.” He began a series of great surprises, such as photographs of my life from childhood to the present being shown on the big screens—along with video clips of some of my family (my mother, sisters Beverly and Rosemary, and brother David) and friends from Australia. The following photos are just a few highlights: 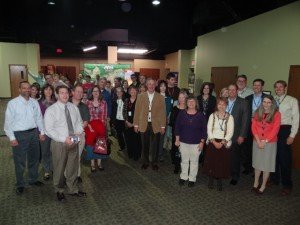 Unknown to me, AiG’s leadership team and our faculty were lining up outside Legacy Hall to join those at the leaders’ conference for “The Big Surprise.” 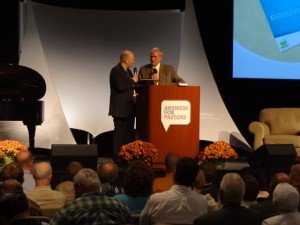 Stephen interrupts me on stage. 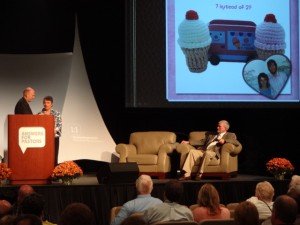 My wife appears on stage and then tells the account of when I asked her to marry me. 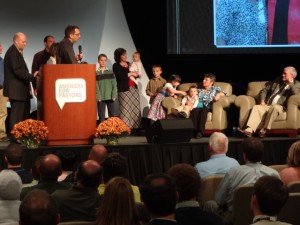 Our five kids with their families (with our seven grandkids) appear on stage. 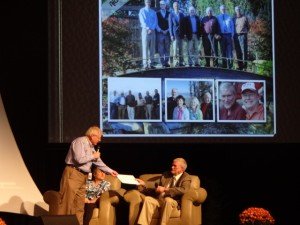 The chairman of the AiG board presents Mally and me with a certificate for a weekend in Pigeon Forge, TN. 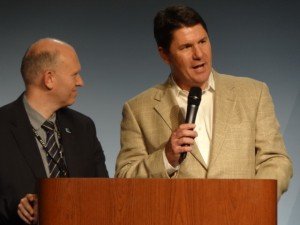 Brad Benbow (president of Joseph David Advertising)—who has also become a close friend—traveled from Muncie, Indiana, for this event. 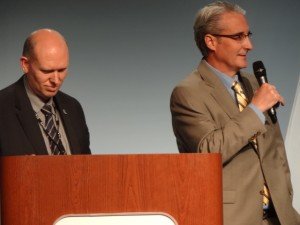 Tim Dudley (president of Master Books) flew in from Arkansas—Tim has been a close friend for many years. 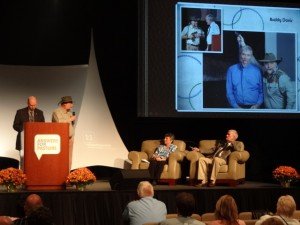 Buddy Davis—AiG singer, songwriter, sculptor, and speaker—traveled down from Henpeck, Ohio, for the birthday event. 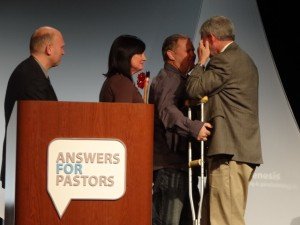 Then “The Big Surprise.” This had been kept a very closely guarded secret (as was everything else on Thursday) to make this a very special moment. My brother David and his wife Thelly had secretly traveled from Australia to be here for this event. As David had broken his leg three weeks ago, I would never have even entertained such a possibility.

During the event, a video clip was shown of my mother telling some “secrets” about my life! She did a great job, and it was hard to keep control of my emotions as I watched this. My sisters Beverly and Rosemary were also on video.  My sister Bev brought the “house down” with her comical comments!

We are a very close family; to see my sisters and mother on video and then for my brother to suddenly appear on stage, what a birthday remembrance this will be! And I guess it helps me get over the emotional stress of admitting I am now 60! Even though the rest of my family would have loved to have been here, I will be visiting with them when we go to Australia in a few weeks (after speaking in Malaysia).

After “The Big Surprise” on stage, about 60 family and friends came together for a special birthday dinner held in Discovery Hall at the Creation Museum. As I looked around the room, I saw friends that I first met 34 years ago:

Mark, Mike, and I were the three who moved to Kentucky to begin AiG and build the Creation Museum. And then in attendance were many of the friends we have made in the USA, such as Sue Jones and Dran Reece from California and then the many friends we have made while in Kentucky. I can’t name them all, but we are so thankful for the dear friends and family the Lord has given us on this earth.