Recently, community newspapers in northern Kentucky—collectively called the Recorder papers—carried a column by Jim Waters of the Bluegrass Institute that was totally misleading (with incorrect information and claims) concerning the Ark Encounter project. We are thankful that the papers agreed to run a column by AiG’s Chief Communications Officer to answer this misleading column. Mark’s column appeared in three of the Recorder community newspapers in Northern Kentucky. 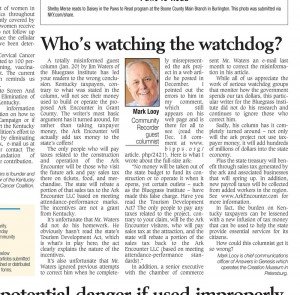 Here is what Mark wrote:

A totally misinformed guest column (January 20) by Jim Waters of the Bluegrass Institute has led your readers to the wrong conclusion.  Kentucky taxpayers, contrary to what was stated in the column, will not see their money used to build or operate the proposed Ark Encounter in Grant County. The writer’s most basic argument has it turned around, for rather than taking taxpayer money, the Ark Encounter will actually add tax money to the state’s coffers!

The only people who will pay taxes related to the construction and operation of the Ark Encounter will be those who visit the future Ark and pay sales tax there on tickets, food, and merchandise.  The state will rebate a portion of that sales tax to the Ark Encounter LLC based on meeting attendance-performance marks. The incentives are not a grant from Kentucky.

It’s unfortunate that Mr. Waters did not do his homework. He obviously hasn’t read the state’s Tourism Development Act, which is what’s in play here; the Act clearly explains the nature of the incentives.

It’s also unfortunate that Mr. Waters ignored previous attempts to correct him when he completely misrepresented the Ark project in a web article he posted in December. I pointed out the errors to him in my comment, which still appears on his webpage and is there for all to see (read the Dec. 18 comment at http://www.bipps.org/article.php/2421). Here is what I wrote about the full-size Ark:

“No money will be taken out of the state budget to fund its construction or to operate it when it opens, yet certain outlets – such as the Bluegrass Institute – have made this false charge. Have you read the Tourism Development Act? The only people to pay any taxes related to the project, contrary to your claim, will be the Ark Encounter visitors, who will pay sales tax at the attraction, and the state will rebate a portion of the sales tax back to the Ark Encounter LLC (based on meeting attendance-performance standards).”

In addition, a senior executive with the Chamber of Commerce sent Mr. Waters an email last month to correct the misinformation in his article.

While all of us appreciate the work of serious watchdog groups that monitor how the government spends our tax dollars, this particular writer for the Bluegrass Institute did not do his research and continues to ignore those who correct him. Sadly, his column has it completely turned around – not only will the Ark project not use taxpayer money, it will add hundreds of millions of dollars into the state economy. Plus the state treasury will benefit through sales tax generated by the Ark and associated businesses that will spring up. In addition, new payroll taxes will be collected from added workers in the region. See www.ArkEncounter.com for more information.

In fact, the burden on Kentucky taxpayers can be lessened with a new infusion of tax money that can be used to help the state provide essential services for its citizens.

How could this columnist get it so wrong? Slowly but surely, people are beginning to wake up to the truth of this matter as we continue to work hard to correct a plethora of misleading articles about the full-size, all-wood Ark in northern Kentucky and south of Cincinnati.

Previous Article Overflow Crowds in Milwaukee! Next Article The Feel for an AiG Conference