Two of the highlights of last year’s AiG tour of Israel (and Jordan) involved Pastor Kirk Wesselink, one of our 65 tour participants (along with Kirk’s wife Joyce). Kirk baptized several people from among our two tour buses, and he also led a very special communion service at the Garden Tomb in Jerusalem (at the so-called Gordon Tomb, which is considered a strong possible site for Christ’s Resurrection).

During the tour, Carl Kerby and Mark Looy—AiG’s tour leaders—encouraged Kirk to bring his family to the Creation Museum, even though they live about 1,400 miles away in Albuquerque, New Mexico. Well, Kirk and Joyce—and their five children—toured the museum for two days this past week, and so it was great for Mark and his wife Renee to reconnect (Carl was away at the time).

In the photo below, the Wesselinks (with Mark, to the right in the white shirt) pose for a gag photo inside the museum: 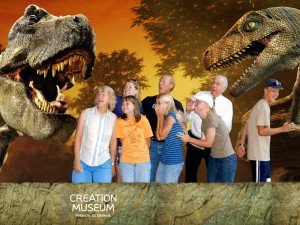 You can find out more about Kirk’s church in New Mexico at www.dhbchurch.org. Years ago, he was on a tour of the Middle East and Greece with our international director, Dr. David Crandall. He is also an author.

Our next tour of Israel leaves in October; we already have two full buses, but there’s a waiting list if you’re interested in taking a fascinating geology tour of the Holy Land—with an emphasis on the Flood of Noah’s time—with Dr. Andrew Snelling, our staff geologist. The best-known biblical sites in Israel are also visited. See this website for more information: http://www.pilgrimtours.com/aig.htm

It’s great to see so many ministry friends making a long journey to come see old friends and tour the Creation Museum.

Since opening Memorial Day weekend 2007, with the more 2000 visitors expected today, the total attendance figures for the Creation Museum are about 1,135,000! And museum reviews (both positive and the few expected negative from the secularists—and even the negative ones usually are positive in regard to the quality of the exhibits) continue to appear.  For instance, here is one review:

After three days, we’ve finally exhausted the museum’s material. It’s been pretty amazing. My favorite part of the whole experience was the planetarium. It was an eye-opening experience. It was awesome. They had some amazing animatronics. I don’t have any pictures off of the camera of those yet. The museum had a cool petting zoo, a chance to ride a camel. (http://homeschoolblogger.com/josiahdavid/773279/)