The Lord Is Good

I was recently moved by an email from an AiG friend who used to live in our area; while here, he had helped the AiG ministry in many ways. Paul moved to Arizona several weeks ago, but stays in touch; here's what he recently shared with us:

I was just reading Ken's daily blog, and he mentioned 3,000 museum visitors had shown up that day. All of a sudden the enormity of the museum's impact just hit me perspective-wise . . . a MILLION people have been through the museum so far, to see the Lord glorified. And that wonderful movie [The Last Adam] at the end of the walk . . . explains salvation better than anything I've heard.

I remember arranging the shipment of a small Cat D5C bulldozer from Washington state to Kentucky, [its use] donated [by] a supporter back in 2001 . . . one of the first pieces of equipment you had to start moving dirt. [I had been] called for transport help because I had trucking experience, as marked in your donor profile of me. And now, that plot of land influences 300,000-400,000 people annually for the Lord Jesus Christ. Incredible. [And millions of others through other outreaches of the overall AiG ministry].

This is truly unreal.

I know I'm stating the obvious, even after being at the museum dozens of times (we sure miss that . . . ) and even photographing it inside and out, but sometimes you take a moment to stop and think and realize how huge something is that the Lord has done . . . a million people, and that number isn't stopping.

– Paul, now living in Arizona We praise the Lord with Paul over all of this!

By the way, Paul is an excellent photographer. Here is photo he took of our museum grounds: 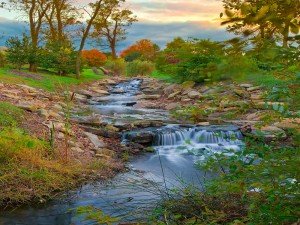 Our staff photographers, Deb and Marty Minnard, have collected their own great photos of the museum gardens for a new book—Gardens at the Creation Museum.

Previous Article Homeschoolers Excelling at College Next Article What Is Marriage?