Radio Rallies at the Museum

We're finding that many radio stations are now sponsoring tours to the Creation Museum, and they are bringing bus loads of their listeners. Moody Radio Indiana is having another group here, this time on October 7 (see their website for details). Stations in Toledo, Dayton, and Cedarville—all in Ohio—have brought groups to the museum as well.

One of the more unusual outings is one that is being sponsored by a “secular” radio station on this Friday and Saturday. Last we heard about 40 listeners from WKYQ, a country music station in western Kentucky, are coming here on Friday; Mark Looy of our staff did an interview with the station on Monday to promote the bus trip.

Having a Ball at the Ballpark—with a Lot of Ministry

Over the weekend, the Creation Museum sponsored our third Faith Day for a Cincinnati Reds baseball game at the Great American Ball Park in downtown Cincinnati (about 25 minutes from our Creation Museum). Baseball fans enjoyed a well played game by the Reds—who beat the visiting Atlanta Braves two to one before a sell-out crowd of over 40,000 people. 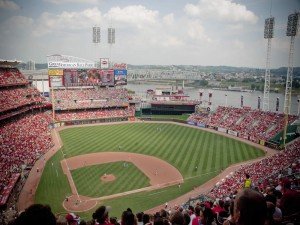 Before the game, AiG’s CCO, Mark Looy, threw out the ceremonial first pitch to his son, Chris. (Yes, Mark did make it over the plate—but a little high!)

Displaying the Creation Museum’s newly wrapped truck, the museum promotions team gave out museum-branded baseballs and wristbands at our booth in the stadium’s FanZone. Nearly 3,000 baseballs were given out! About 20,000 fans stayed after the game to see the Christian band, MercyMe, perform. 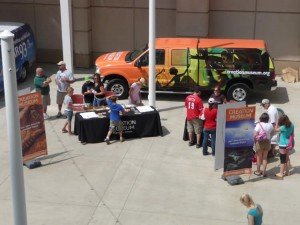 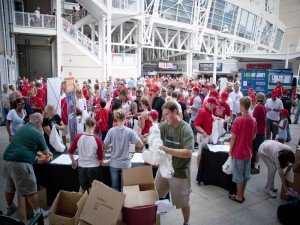 Here is a photo of Jason Goff sharing with our staff on Tuesday about Faith Day at the ballpark. 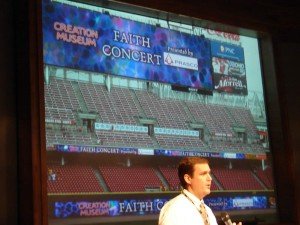 Next, the museum promotions team will be at our local Boone County Fair all this week, and they will set up at the Indianapolis Indians baseball game (about two hours away) on Saturday, August 21.

Their lips do honor me, but have removed their heart

(Isaiah 29:13)  Wherefore the Lord said, Forasmuch as this people draw near me with their mouth, and with their lips do honor me, but have removed their heart far from me

We constantly guard our heart from wandering in our minds from the Lord Jesus Christ—even though we might pray eloquent prayers. Thanks for stopping by and thanks for praying,