As part of Debate Summit 2010 in Ohio, Dr. Andy McIntosh, an adjunct speaker for our sister ministry in England, will be debating Dr. Will Provine of Cornell University on the topic of “Flight in Birds and Bats: Is Evolution or Creation the Best Guide?” The event will be held this Saturday, March 13, in the Ohio town of Washington Court House (about a 1 1/2-hour drive northeast of our Creation Museum).

Pastor Jay Lucas, the debate's organizer, shared the following with us:

Andy will show that it takes a tremendous amount of genetic information and specialized traits for a bird or bat to be capable of flight. As one of the world’s preeminent spokesman for evolution, Dr. Provine believes that this change resulted from natural evolutionary processes over millions of years. Dr. McIntosh believes that only the creative power of God is sufficient to account for the phenomenon of flight. Christians will recognize that beneath the surface topic of flight, there exists a core spiritual issue. Destroy the concept of a Creator, and you strangle Christianity in the crib. And once you have done that, one no longer need worry about being personally accountable to a holy God.

Find out more about this debate (and others) at http://debatesummit2010.blogspot.com/

Night at the Creation Museum

A young boy (Colton)—who writes to me on occasion—sent me the following letter this past week: 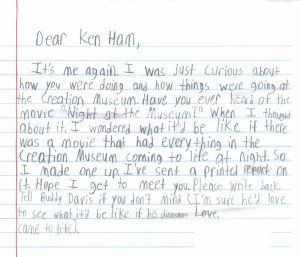 He then sent me his “script” for his Night at the Creation Museum adventure: 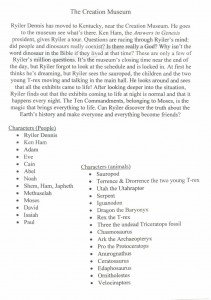 Thanks, Colton. I love the fact that the Creation Museum and the ministry of Answers in Genesis are having such a positive influence on coming generations.