Yesterday I was thrilled to meet a group of Aussies (mostly from my home state of Queensland and its city of Brisbane) and New Zealanders, who visited the Creation Museum. They were on their way home after a conference led by people associated with Southern Cross Educational Enterprises, Ltd—a nonprofit company in Australia that has contact with ACE Ministries in Nashville, Tennessee. They provide and support the ACE (Accelerated Christian Education) curriculum to Christian schools and home schools in the South Pacific and Indonesia.

Twelve Australians (one from Victoria, one from New South Wales, and the rest of Queensland) with five New Zealanders and 12 Fijians attended the ACE International Student Convention at Central Missouri University during the last week of May. On their way home, the Australians and New Zealanders visited the Creation Museum.

Because of the connection with my home country of Australia, I took them all on a behind-the-scenes tour! Excited comments were made about the photos of Aussie cricketers hanging on my office wall! It was great to talk with people who understood cricket (rather than baseball!). They will be telling other Aussies and Kiwis to visit the Creation Museum.

Here is a photograph I had taken of me with the group: 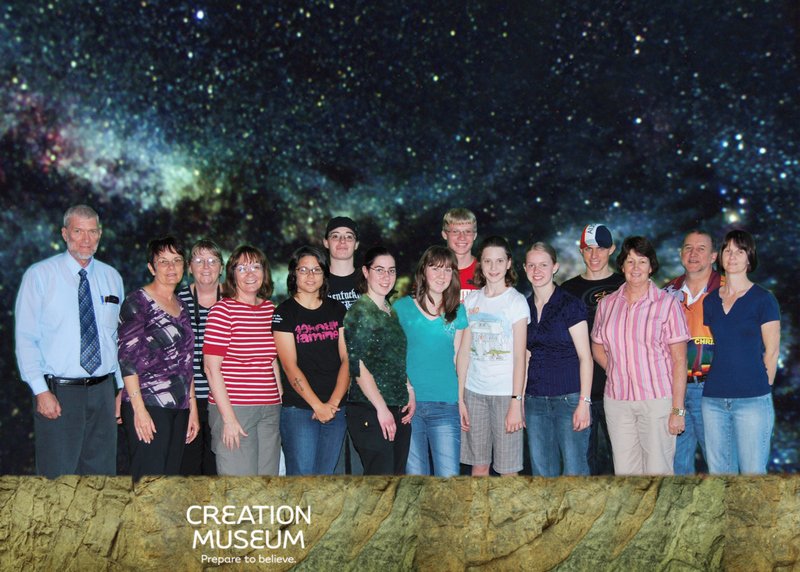 The Australian edition of the website, Christiantoday.com featured a news release on the two-year anniversary of the Creation Museum. The report began:

The controversial Creation Museum in Petersburg, Ky., marked its second anniversary this past week with slightly lower numbers than its first year but with much excitement.

“We enter our third year excited about the growing opportunities the museum provides for reaching people with the creation gospel message,” commented Ken Ham, the founder and president of the 70,000-square foot museum.

“We believe God is using us to make a difference in our post-Christian culture, and we will continue to do everything we can to help believers defend the Word of God, from the very first verse,” he added.” You can read the full report at:

Today the president of Master Books told me he has already ordered the second printing of our new book Already Gone, as most of the first printing is almost already gone (excuse the pun)! Our staff came in yesterday morning to many hundreds of web orders (many more than usual)—and the book only came into our warehouse last Wednesday. The publisher has almost depleted stocks of the first printing for the Christian book market.

I am starting to receive requests for media interviews about the book (I did one yesterday—more scheduled for this week).

Not to harm us, but to help us

Our Lord Jesus Christ became sin for us, not in order to harm us, but to help us. Thanks for stopping by and thanks for praying,