We were thrilled that the marketing agency we work with (Joseph David Advertising; www.jdausa.com) informed us last week that the Creation Museum TV commercial, billboard advertising and other marketing pieces won a number of big awards at the Indianapolis Ad Awards. Not only did we win Best of Show Broadcast, the top honor of the night for the Creation Museum spot, but we also won 4 gold Addys for the billboards, the brochure, for best animation and best TV. AiG’s continued philosophy of excellence in every area is being noticed by the secular world! We praise the Lord for the talents of Brad Benbow, Beckie Manley, and others from JDA who make this possible.

I will include some photographs and a more detailed write up about these awards (and those who made this possible) in a future blog.

A number of the very talented performers from the Ringling Bros. and Barnum and Bailey circus visited the Creation Museum yesterday. This group normally meets for Bible studies and they used their normal Bible study time for this visit. Mally and I are taking our grandchildren to see (and meet) these performers this weekend. Bello (a comedian daredevil-clown) is probably the most internationally recognized personality (see his wild hair in the photo and you’ll know why he’s become so famous in his world travels) to have visited the Creation Museum since we opened just over 9 months ago. 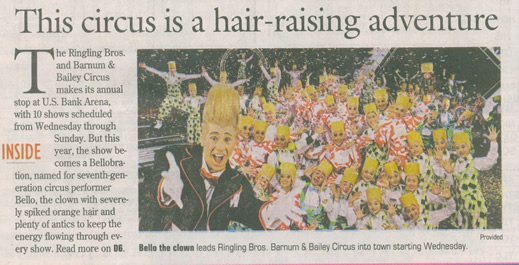 I found the following fascinating article on the web concerning the decline of Christianity across Europe. Although I can’t vouch for the author or the research, what I have read fits with what we have researched. The article states:

As was mentioned in the introduction, things are not going as well in Western Europe as many might have hoped, or may yet expect for a continent which in the last few centuries has produced such spiritual giants as John Wesley, Martin Luther, and Jean Calvin. No, indeed, things have turned for the worse. Today's Western Europe is one of largely empty cathedrals (many have already been converted into discos, restaurants, and even mosques due to a lack of use), rampant moral decay, and spiritual darkness. Michelle Vu, foreign missions journalist for the Christian Post, puts it plainly in a recent article, “As many know, Christianity is declining in Europe to the extent that it has been called ‘the least evangelized spot on earth' when looking at all of Europe's population.” As the report continues, Vu points out that Europe's evangelical believers have fallen to less than 4% of the total population, with less than 1% calling themselves evangelical in some countries. http://www.samizdat.qc.ca/cosmos/origines/evol_barrier_rw.htm