DESIGNED TO QUENCH THE THIRST FOR PURPOSE AND MEANING IN LIFE??

Starbucks “The Way I See It” cups have a variety of quotes on them. One such cup can be seen in the attached photograph taken by AiG supporter Steve W. from Illinois. 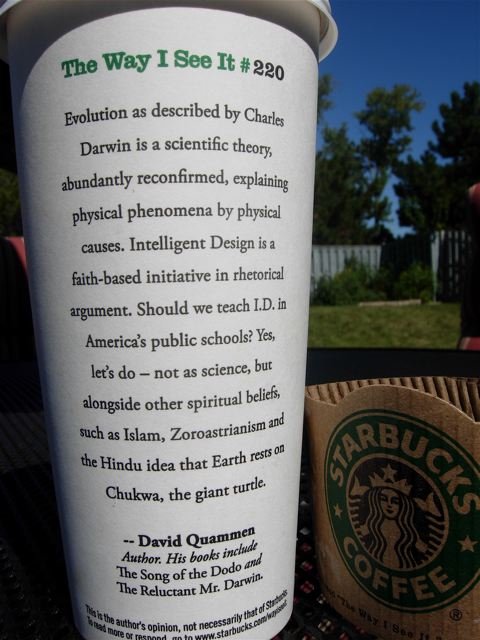 “The Way I See It #220: Evolution as described by Charles Darwin is a scientific theory, abundantly reconfirmed, explaining physical phenomena by physical causes. Intelligent Design is a faith-based initiative in rhetorical argument. Should we teach I.D. in America’s public schools? Yes, let’s do it – not as science, but alongside other spiritual beliefs, such as Islam, Zoroastrianism and the Hindu idea that the Earth rests on Chukwa, the giant turtle. — David Quammen Author. His books include The Song of the Dodo and The Reluctant Mr. Darwin.”

Now to be fair (and to justify my visits to Starbucks!!!) I wonder if Starbucks would consider a quote from someone far more knowledgeable than any human being—the Creator of the Universe?

However, if you do go to up to the designed Starbucks counters, with all the high quality designed equipment and are given cup number 220, then if you were consistent, sit down and ponder the real consequences of this quote—that you are just an animal, and the people who served you were just animals, and that ultimately there is no purpose and meaning in life! No caffeine shot could lift you out of the despair!

But Answers in Genesis teaches you the truth about how you can quench the ultimate thirst:

“When a Samaritan woman came to draw water, Jesus said to her, ‘Will you give me a drink?’ … Jesus answered her, ‘If you knew the gift of God and who it is that asks you for a drink, you would have asked him and he would have given you living water.’ ‘Sir,’ the woman said, ‘you have nothing to draw with and the well is deep. Where can you get this living water? Are you greater than our father Jacob, who gave us the well and drank from it himself, as did also his sons and his flocks and herds?’ Jesus answered, ‘Everyone who drinks this water will be thirsty again, but whoever drinks the water I give him will never thirst. Indeed, the water I give him will become in him a spring of water welling up to eternal life.’ The woman said to him, ‘Sir, give me this water so that I won’t get thirsty and have to keep coming here to draw water.’ (John 4: 7-15)

Mally and I will be in Indiana over the next few days for my speaking presentations (all open to the public) at: