This past weekend, it was my great pleasure to speak at the Appalachian Bible College (ABC) Women’s Auxiliary Retreat. It was so refreshing to be at a Christian college that is committed to upholding the truth and authority of God’s Word. Freshmen are required to take a course in which they go on a field trip to the Creation Museum. One of the ladies told me that ABC wants to make sure the students understand the foundational importance of Genesis to Scripture.

The women were very attentive and engaged in the sessions, and it was encouraging to be with like-minded women. So many of them talked with me about how they were using AiG resources at home and in their churches. Many were excited about the new Sunday school curriculum, Answers Bible Curriculum, and are looking forward to using it in their churches this fall. Others said they were preparing for IncrediWorld (Answers VBS this year) and some were planning on attending our Proclaiming the Faith conference in Branson. What a great outpouring of support!

I was also encouraged that several of the women brought their teen daughters to the conference. In my conversations with the leaders of the women’s auxiliary, it was obvious that they have a Titus 2 mentality. They take very seriously the instructions to mentor young women and are hoping to continue expanding this aspect of their ministry.

My daughter Elizabeth accompanied me on the trip as my assistant. She was a great helper from unpacking to packing to being patient during the sessions and after the sessions when I talked to the ladies. She even reminded me of things to tell the volunteers because she says sometimes I’m forgetful!

The term “adventure” took on a whole new meaning on my way to ABC. I had my trusty GPS (because I am very directionally challenged) and so I thought I was all set. In Charleston, West Virginia, the GPS told me to get off the main highway, which I thought was strange, but I thought maybe it knew a shortcut. As I continued to follow its directions the roads got narrower, the surroundings got more “uncivilized,” and I eventually saw a sign that said “No snow removal beyond this point.” That should have been enough to make me turn around, but it didn’t because I can’t follow printed maps very well and there was no one to ask for directions!

The grass was now overgrowing the road (because if they aren’t removing snow then they are definitely not mowing!), the potholes were enormous and the road was so narrow that I didn’t know what I would do if I met an oncoming car (which I never did because no sane person would ever take this road). Almost the whole time I was on the road, I could see the toll road running along side through the trees and hills, and I thought this dumb GPS just wanted to save me a few bucks and take me the back way.

After much prayer for safety and determination (and about an hour or so later than scheduled), we made it! I kept telling my daughter when we were on the road that this would make a great story and analogy to our spiritual walk. Sometimes God (our divine GPS) leads us down a path that seems really wrong and difficult, but He has a plan and a purpose for it in our lives. He is ever faithful (like my GPS), and eventually we end up exactly where He wants us and we are so much the better for it. I now have a great story I can use, and those are valuable to me as a speaker. It was also a great example to my daughter of God’s love and care for us.

When I called my husband Chris after we arrived and told him of our ordeal, we discovered why the GPS had taken me that way. When he had used it previously, he programmed the GPS to avoid toll roads because he didn’t have any cash. AAHH! I may not have paid toll fees, but he was going to pay a toll when I returned home! Just kidding—I love him and I forgive him.

My blogging may be a bit sparse over the next few weeks as I prepare for the Branson conference, but I hope to be back to “normal” blogging by the end of July. 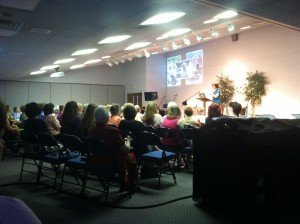 Speaking to the ladies (Elizabeth was also my official photographer). 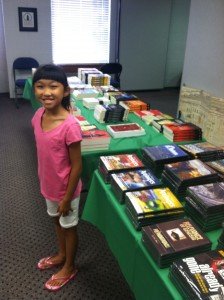 My very helpful and beautiful assistant! 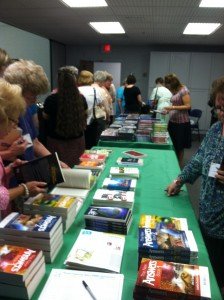 Women busy getting equipped through resources