Telling Truth or Fiction? My Visit to the Tellus Science Museum in Georgia

A couple weeks ago, while visiting Atlanta, my friend Janice (a high school science teacher) suggested we visit the Tellus Science Museum, just north of Atlanta in Cartersville, Georgia. You can imagine the fun that two scientists/science educators have in a science museum!

We both wondered where the word “Tellus” was derived from, and we discovered in the museum that it is the name of a Roman earth goddess. Obviously this plays on the idea of “Mother Nature” and earth as a supreme being instead of the biblical truths that the earth was created (Genesis 1:1) and that man has been granted dominion over the earth (Genesis 1:28).

I wasn’t sure whether to laugh or cry when I read this sign at the beginning of our walk-through. 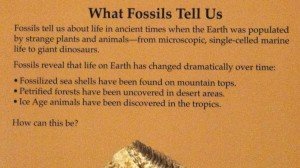 Fossils don’t “tell us” anything! They don’t speak; we speak for them. So our starting points or worldview determines the conclusions we draw about the past based on the evidence we observe in the present. Starting with the Bible, I can explain all of these findings based on a global catastrophic Flood.

I was impressed with the size and uniqueness of the some of the dinosaurs, sea creatures, and flying creatures that were on display. 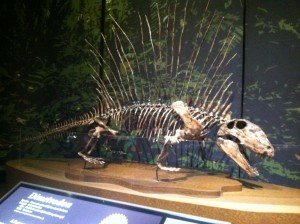 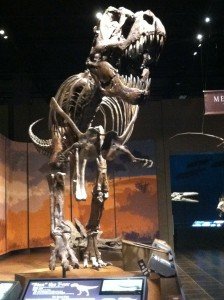 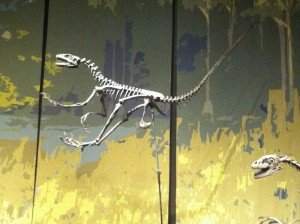 Dromaeosaur- a reminder that many dinosaurs were small

Some of my favorites, however, were not dinosaurs.  This giant turtle is called Protostega.  The bones that make up the shell were quite unique and almost looked like sea shells with their grooved design. 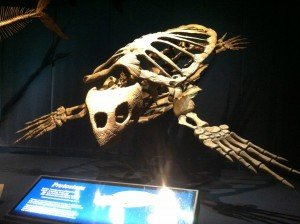 I certainly wouldn’t want to meet Xiphactinus while swimming in the ocean!  And I thought piranha looked vicious. 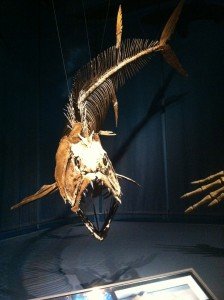 The Elasmosaurus was difficult to get a picture of because of its size. (I still managed to cut off part of the tail!) I didn’t count the number of vertebrae (probably over 100), but looking at the size of the spinous process (part of the vertebrae that sticks up) helps us know that the muscles attached to it would have been massive. And look at the size of those flippers- this creature was making some serious waves. 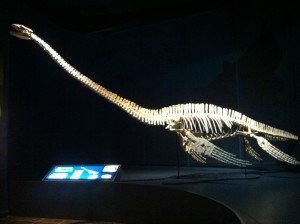 Glyptodon is a giant aramadillo that reminds me of an armored tank. 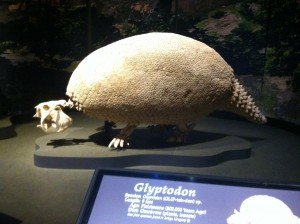 They also had an impressive mineral, rock, and gem collection, including this 7 foot by 5 foot amethyst geode—one of the largest in the world. 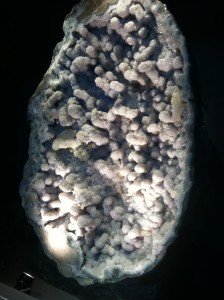 As creation scientists Janice and I very much enjoyed our visit to the museum. We marveled at the intricate design and beauty that God created. We ignored the supposed age of the animals on the signs, knowing that God created all the original animal kinds around 6,000 years ago and that many of the fossils were only 4,500 years old according to God’s Word.

When I returned home from Atlanta, the new Lucy exhibit had opened at the Creation Museum. How thrilling to see Lucy represented as an ape instead of the imaginative storytelling of evolutionists that have her standing upright and looking very human. 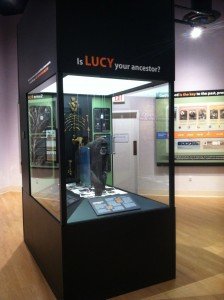 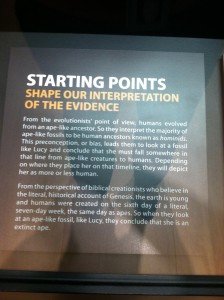 The importance of starting points 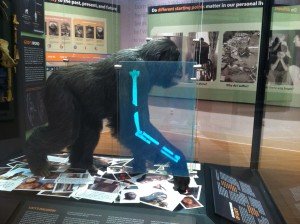 Previous Article Commencing in Atlanta Next Article Can You Marry Yourself?