The Modern Flat-Earth Movement and Anti-Semitism

By my count, this is the eighteenth time that I’ve written about the modern flat-earth movement. In addition, I have a book on the subject coming out in September, and my most recent article discussed the sociology of it. One aspect that I intentionally left out of that discussion was the thread of anti-Semitism among flat-earthers today. Most flat-earthers don’t appear to be anti-Semitic, so I had been willing to overlook it. So, what changed my mind to take up this topic up now? I recently began reading Edward Hendrie’s book, The Greatest Lie on Earth: Proof That Our World Is Not a Moving Globe, first published in 2016, but with nine editions (!) since. The first publication date coincides with the year I became aware of the flat-earth movement, so this book came out relatively early in the movement’s history. I was shocked by both the extent and the character of anti-Semitism in this book. 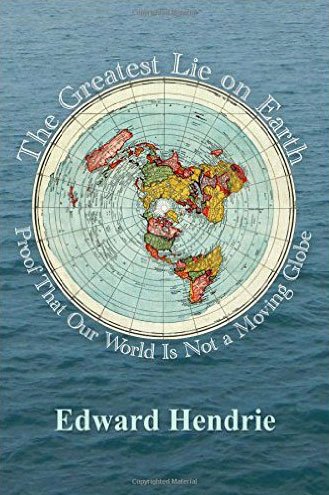 Examples? There are plenty. Anti-Semitism is not apparent in the first half of the book, but in the second half it is brutally obvious. Conspiracy theory is an integral part of the modern flat-earth movement, so Hendrie addressed his view of a global conspiracy. In a short chapter titled “Conspiracy,” Hendrie draws upon two Old Testament passages (Ezekiel 22:25–28 and Jeremiah 11:9–10), which refer to a conspiracy among Jewish prophets and priests to turn the people away from God. Hendrie compared this to the conspiracy of the leaders of the Jews to crucify Jesus (Matthew 26:3–4). Then Hendrie wrote,

The Jews stirred up the people, who then persuaded the Roman governor, Pontius Pilate, to crucify Jesus. “[T]he chief priests and elders persuaded the multitude that they should ask Barabbas, and destroy Jesus.” (Matthew 27:20) The methods used by the Jews have not changed. Today the Jews control the mass media, which they use to propagandize the people into pushing the politicians into doing their bidding against God and his anointed (406).

The argument continues in the next chapter, titled “Identifying the Conspirators.” Here is a sample:

Zionist Jews have created all manner of antichrist philosophies designed to propagandize and enslave the masses. (408)

The fact that communism is actually a religious philosophy born of the Talmud and put into practice has been concealed from the ignorant Gentiles. (408)

The Bolshevik revolution was Jewish from top to bottom. (411)

Henry Makow explains that the brutality of the Bolshevik Revolution in Russia was inspired and led by Talmudic Jews. (413)

Do not think that Jews are ignorant of the fact that Satan is the god of their religion. (418)

The purposeful promotion of evil by Jews is the reason that we find vice, death, and destruction, at every turn of the Zionist screw. (419)

This evil doctrine can also be seen in the Talmud, where incest, fornication, adultery, etc. are promoted as virtues and something to be desired. (420)

The earthly god of Judaism, who is androgynous, is known as Leviathan or Malkut. (425)

The ritual sacrifice of Gentile children by Jews has led to repeated banishment of Jews from one nation after another throughout history. (442)

Ritual murder is the dark Satanic secret of Judaism. (450)

And the anti-Semitism continues into the next chapter:

Zionist Jews control the educational system and have created a false science that has removed God from the minds of men through so-called science that alleges that there is a universe without a creator. (466)

Elite Jews are the agents of Satan in a massive conspiracy working toward world domination. (468)

Each of the sentences that I quoted above is the first sentence of its respective paragraph. In each case, the paragraph and often the following paragraphs expounded on the views expressed in their opening sentences. And these are not isolated examples. The blatant anti-Semitic material dominates more than 150 pages in this book. It is difficult for sensible people to read.

Hendrie is not the only anti-Semitic flat-earther. Eric Dubay, who probably is more responsible for reintroducing a flat earth to the 21st century, is also anti-Semitic. For instance, his influential book 200 Proofs Earth Is Not a Spinning Ball features anti-Semitic imagery (see image above). Want more proof? Dubay has written the following on his Atlantean Conspiracy website:

They say “the winner's write history,” it is absolutely true, and the most egregious example in modern times has to be the mainstream (mis)understanding of Adolf Hitler and pre-WWII Germany. Adolf Hitler was actually a vegetarian, animal-lover, an author, an artist, a political activist, economic reformer and nominated for a Nobel Peace prize. He enacted the world's first anti-animal cruelty, anti-pollution, and anti-smoking laws. Unlike the demonic portrait that the “allies” painted of him, Hitler was beloved by his people, he wanted nothing but peace, and never ordered the extermination of a single Jew. The largely Jewish-controlled mainstream media has ever since painted an evil picture of Hitler and the Jew World Order has even enacted laws in 16 European countries prohibiting free-speech on the issues of Judaism, Hitler and the Holocaust. (39)1

Where did the anti-Semitism of the modern flat-earth movement come from?

When most people are asked for evidence that the earth is a sphere, they will appeal to photographs of the earth from space. Such photos didn’t exist more than six decades ago, so the flat-earth movement of the late 19th and early 20th centuries didn’t have to deal with them. If the earth is flat with a dome over top, then orbiting satellites and astronauts are impossible. Therefore, to salvage their belief, flat-earthers must concoct the theory that nearly everything that NASA and other space agencies have done has been faked. But this, in turn, raises the question of the motivation of such agencies. The obvious answer is that NASA and similar space agencies are part of a vast global conspiracy to lie about the earth’s shape—a conspiracy that has been going on for a long time. There must be some nefarious organization behind this conspiracy. For many flat-earthers, the Freemasons are behind the conspiracy. For others, it is the Jesuits. Still, other flat-earthers believe that it is Jews who are behind the conspiracy.

Global conspiracy theories have been around for decades, and these three groups, the Freemasons, Jesuits, and Jews, are the most commonly hypothesized conspirators. Widespread suspicion about the first two go back centuries, but suspicion about Jews running everything only goes back about a century to the 1903 publication of The Protocols of the Elders of Zion in Russia. The Protocols was supposedly the minutes of a secret meeting of Jewish leaders in the late 19th century, in which they laid out their plans to control the world. The Protocols was a product of the period of greatest anti-Semitism in imperial Russia. Though a complete fabrication, The Protocols was quickly translated and published into many languages. Henry Ford paid for the publication and distribution of a half-million copies in the United States. The Protocols was endorsed by the Nazis and incorporated into school curricula in Nazi Germany. It has been declared authentic by many leaders in the Arab world today. Once global conspiracy theories became common later in the 20th century, it was very easy to fold anti-Semitism into the mix. Hence, while the flat-earth movement is not inherently anti-Semitic, conspiracy theories upon which it relies often are.

The point is that flat-earthers who engage in such flaky reasoning have no right to protest when the tables are turned just a wee bit.

I expect that some flat-earthers will object to my bringing up this subject, insisting that they aren’t anti-Semitic and that they resent any implied association with anti-Semitism. However, their hands are not clean in this sort of thing. Flat-earthers frequently point out the supposed occultic basis of the conventional cosmology. Many flat-earthers falsely claim that Pythagoras was motivated to believe that the earth orbits the sun because he was a sun worshipper. Hence, many flat-earthers insist that heliocentrism is sun worship. Many flat-earthers claim that belief that the earth is a globe is based on paganism. Flat-earthers frequently point to Jet Propulsion Laboratory (JPL) co-founder Jack Parsons’s belief in occultic Thelema as evidence that JPL is a satanic organization. Flat-earthers further insist that since Parsons and Wernher von Braun corresponded, von Braun was an occultist too. Ergo, von Braun’s association with NASA makes NASA a satanic organization as well. There are other examples of such sloppy logic that I could list. The point is that flat-earthers who engage in such flaky reasoning have no right to protest when the tables are turned just a wee bit.

To be very clear, I don’t think that most flat-earthers are anti-Semitic. At least I hope that they aren’t. Recently on a Facebook flat-earth discussion group, I shared the above quotes from Hendrie’s book. I repeatedly asked for condemnation of this rank anti-Semitism by flat-earthers in the discussion group. I was very disappointed that none did. This suggests that none of them were willing to stand against such repulsive bigotry, and at worst it could suggest that none of them had a problem with anti-Semitism. It even suggests that some of them might share the beliefs expressed by Hendrie, though they were reluctant to admit it. One flat-earther complained that it wasn’t a relevant argument because there probably were some anti-Semites who believed that the earth is a globe and asked where my condemnation of them was. I responded that if he could identify anti-Semites among those criticizing flat earth, I’d condemn them. He offered no names. So, until I see some condemnation of anti-Semitism from flat-earthers, I have to assume that they are OK with anti-Semites in their midst.

Some may ask if anti-Semitism is all that bad. The resounding answer is “Yes!” Answers in Genesis has long condemned racism because there is absolutely no basis for racism in the Bible. Acts 17:26 explicitly says that God made all men from one blood because we are all descendants of Adam. Hence, there is only one race, Adam’s race. Since this includes the physical descendants of Abraham, this must include Jews as well. As a Gentile Christian, I am part of God’s covenant people (Ephesians 2). Even more, Jews are part of God’s covenant people (Deuteronomy 14:2; Ephesians 2:11–22).

It is a mystery to me how those who profess the name of Christ can harbor ill-will toward Jewish people. It is time for Christian flat-earthers to expose and condemn the anti-Semites in their midst.

Previous Article Aren’t We Celebrating Easter a Month Late this Year? Next Article Saturn After a Half Century