NASA, the Changing Size of North America, and the Flat Earth

As I’ve written previously, flat-earthers deny that there are any satellites or astronauts. There is no International Space Station (ISS), and we haven’t landed on the moon. So all those photos and videos of astronauts in space must have been faked. What do flat-earthers think of NASA? Obviously not much. Flat-earthers must insist that NASA is a sham organization that has lied about everything it has supposedly done. Flat-earthers spend considerable time and effort attempting to debunk all things from NASA. Though their arguments are many, in this article I will take up just two complaints.

Take NASA’s name, for instance. Flat-earthers claim that in Hebrew, the word nasa means to deceive. Hence, this proves that from its founding, NASA admitted in plain sight that it deceives people. Only on the campy 1960s Batman TV show would such an outrageous clue make any sense. Several Hebrew words in the Bible are translated as “deceive” or some derivative thereof. The intended Hebrew word here is nasha’, which appears 15 times in the Old Testament. Twelve times nasha’ is translated “deceive” or “deceived” (2 Kings 18:29, 19:10; 2 Chronicles 32:15; Isaiah 19:13, 36:14, 37:10; Jeremiah 4:10 [twice for emphasis so that it is translated “greatly deceived”], Jeremiah 29:8, 37:9, 49:16; Obadiah 1:3 and 7). In its first appearance (Genesis 3:13 KJV), it is translated as “beguiled.” However, in Psalm 55:15 nasha’ is translated “seize,” and in Jeremiah 23:39, it is translated as “utterly.” Why the difference in these two verses? Probably because of the semantic range and nuance of context. In either case, the meaning clearly isn’t to deceive.

The flat-earther claim that NASA means “to deceive” in Hebrew is a specious argument.

But is there a similarity between NASA and nasha’, and if so, does it imply a connection between the two? Most people use the acronym NASA yet have no idea what NASA stands for (National Aeronautics and Space Administration). Unlike other government agencies, such as the FBI and CIA, we tend to pronounce NASA as a word rather than saying the letters that spell it out. This has lent to our thinking of NASA as a word rather than initials for a government agency. Notice that this has led to pronouncing the first letter A in NASA as a short a and the second letter A as a short e. We pronounce the two consonants as we normally do, with the accent on the first syllable. However, compare that to how the Hebrew word nasha’ is pronounced. The first consonant is pronounced the same way that we say our letter n, but the second consonant is pronounced as sh. Furthermore, both a’s are pronounced as we would say awe. Finally, the accent is on the second syllable, not the first. If most people heard the Hebrew word nasha’ properly pronounced, they wouldn’t make any association with NASA. Therefore, the flat-earther claim that NASA means “to deceive” in Hebrew is a specious argument.

The Changing Size of North America 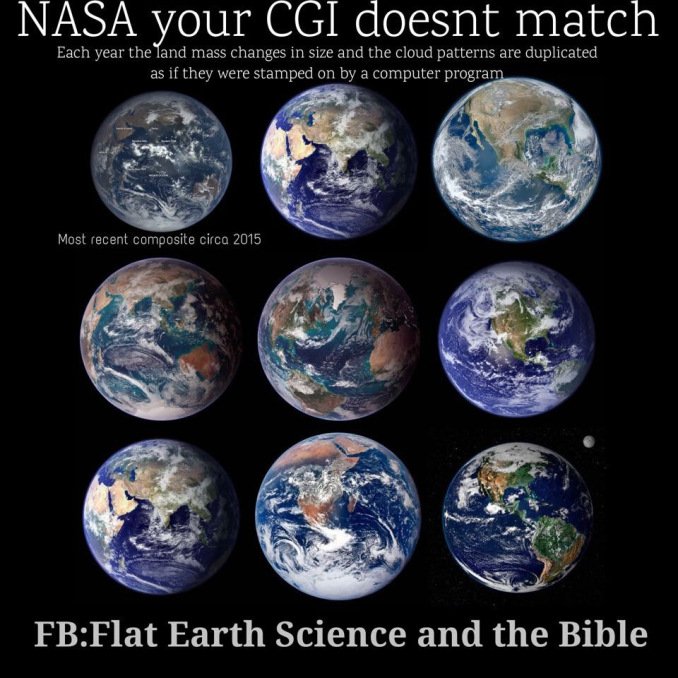 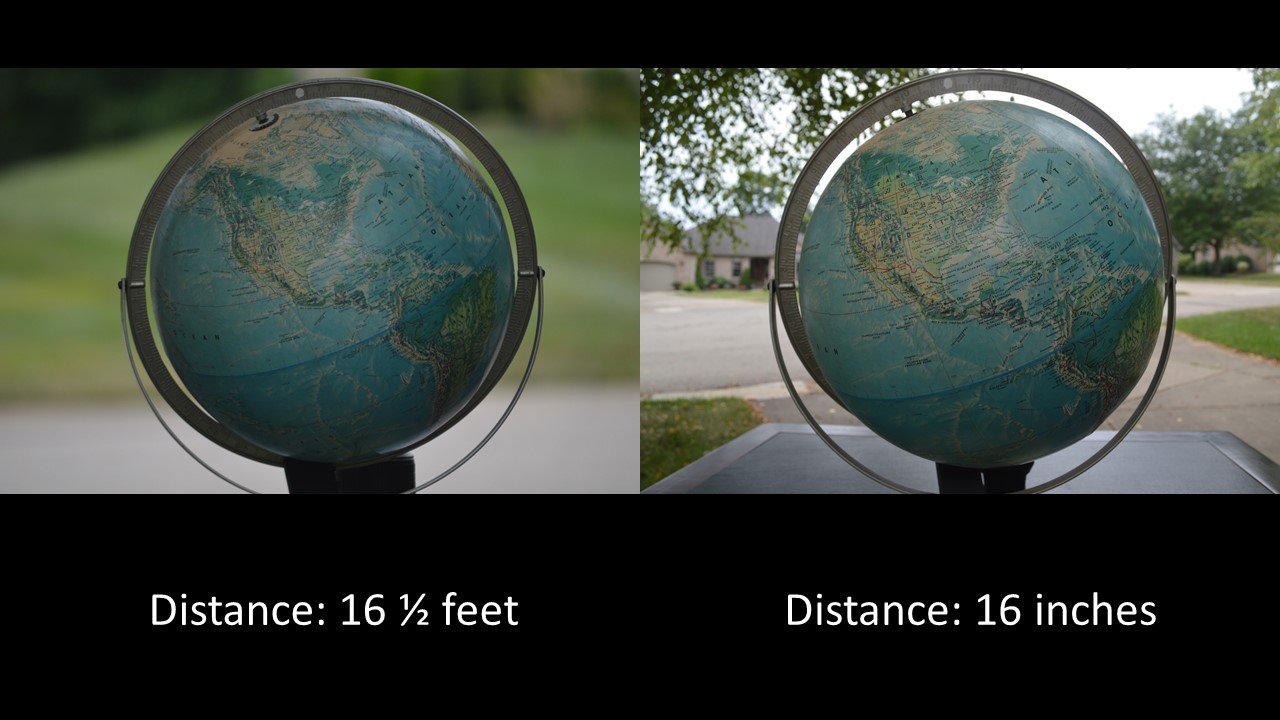 When you are closer to a globe, you see less of the globe than you do when you are farther away. You can see this by carefully comparing the two photos of my globe. The one on the left shows more surface area than the one on the right. But when we look at any image of a globe, it gives the illusion that we are seeing half the globe’s surface when we are really seeing something less than half. Displaying what we see as the same size completes the illusion. In what follows, I will go into some mathematical detail. If you don’t want to follow those details, skip down to the next section. 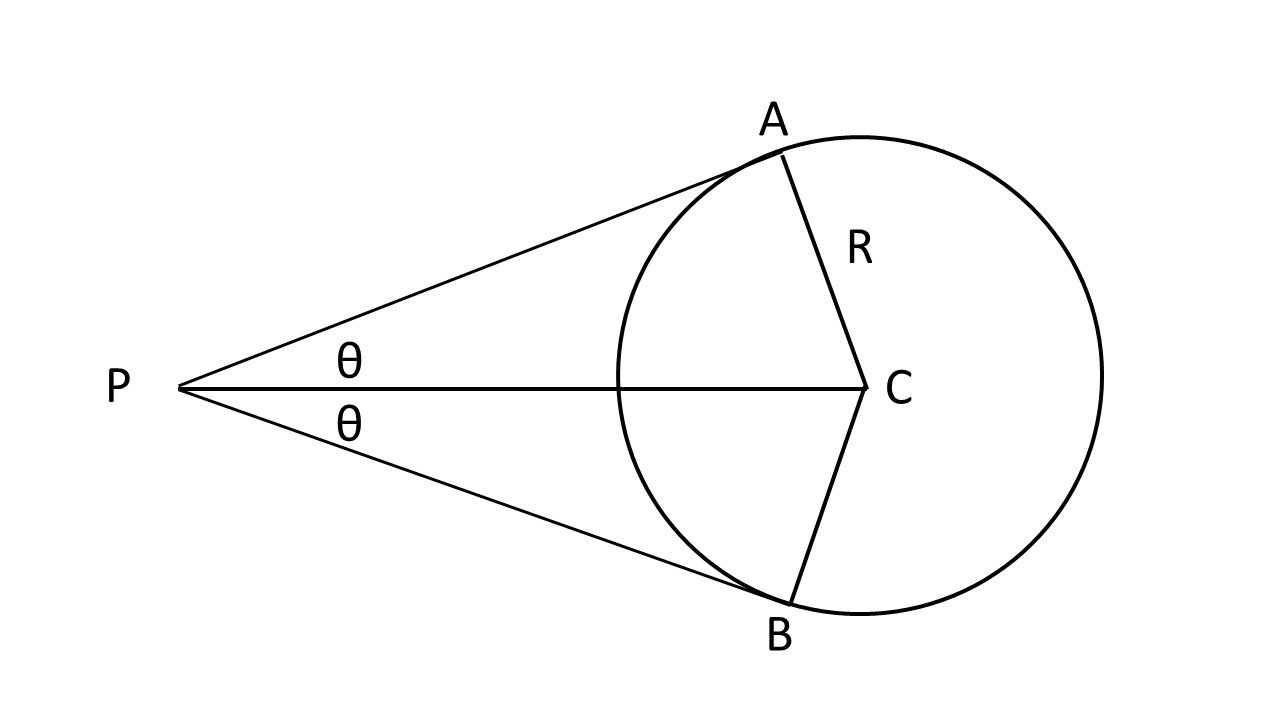 The accompanying figure illustrates the situation. The circle represents the globe. The point P represents the location of the camera lens at the distance PC from the center of the globe. The lines PA and PB are tangent to the globe. Notice that the points on the circle to the right of points A and B are blocked from view at point P. The only points on the circle visible from point P are those points between points A and B on the left side of the circle. That is, less than half the circumference of the circle is visible from point P. This is a two-dimensional representation. In three dimensions, the portion of the globe visible at point P will be the spherical cap inscribed by a cone with its apex at point P having apex angle of 2θ and bounded top and bottom by the lines PA and PB. The result is that less than half of the globe’s surface is visible. Notice that as the distance PC increases, the amount of visible area increases. At a very great distance, the amount of area ought to approach the entire half of the globe facing point P.

Let me quantify this. The lines CA and CB are radii of the globe. Let that radius be R. The triangles PAC and PBC are congruent right triangles. Hence,

The problem is that since what we see appears as circles about the same size, our minds incorrectly assume that we are seeing the entire half of the globe in either photograph.

Now You See It, Now You Don’t 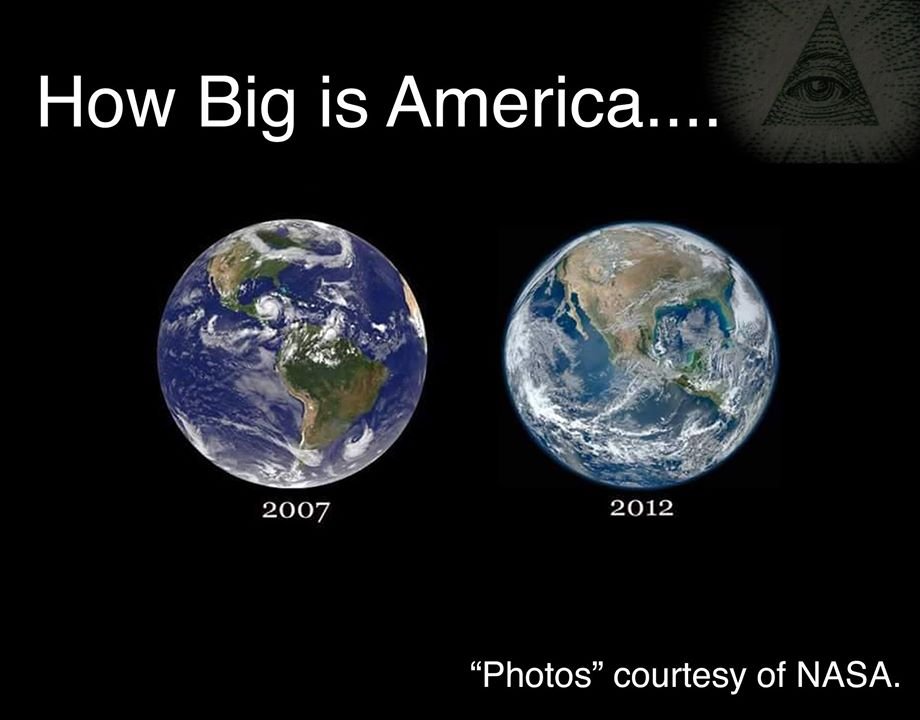 The NASA Photos Don’t Lie After All

In similar manner, the satellite photographs that show varying sizes of terrestrial features at different times come from different spacecraft orbiting at different distances from the earth. Therefore, rather than proving that these photographs have been faked, the changing size of earth’s features proves that the photographs are not faked, because they show exactly what we expect to see if the earth is a globe photographed from different distances. Hence, the flat-earth claim about the changing sizes of features, such as North America, on satellite photos of the earth is false. This is an example of flat-earthers using what appears at first to be a good argument in support of their model. However, like so many other flat-earth claims, it doesn’t stand up to scrutiny.