I’ve been amazed how many people have asked me about Philae, the probe that recently landed on the surface of Comet 67P/Churyumov-Gerasimenko. Philae was attached to the Rosetta spacecraft that the European Space Agency (ESA) launched on March 2004. In terms of fuel consumption, Rosetta traveled a very efficient course to rendezvous with the comet. However, in terms of time, it wasn’t so efficient—it took 10 years to arrive at the comet, even though the comet isn’t that far away. During the 10 years, Rosetta flew past Earth three times and Mars once to get gravity assists and course corrections. As a bonus, Rosetta flew past two asteroids and returned photos and other useful information. Rosetta achieved orbit around the comet in August of this year. Philae detached from Rosetta on November 12, and it landed on the comet’s surface a few hours later. 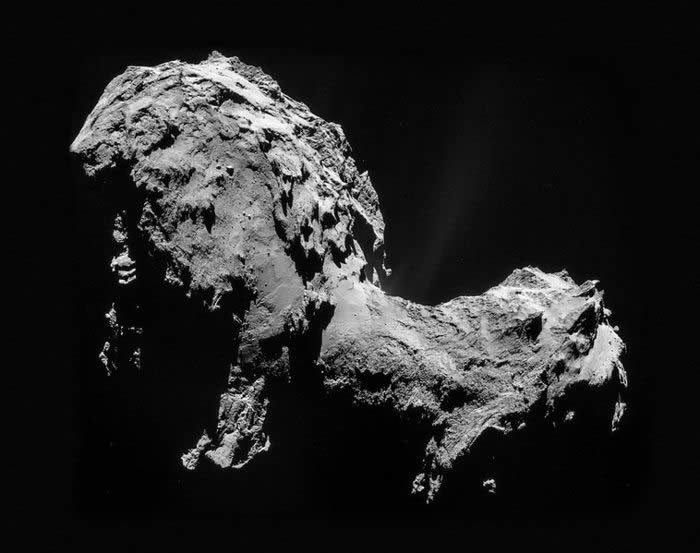 The landing was complicated. Because it took radio signals 28 minutes to travel between the comet and Earth, no one could pilot Philae. Instead, Philae had to land itself following pre-programed instructions. The lander struck the surface of the comet at a speed of about two miles per hour. Harpoons on Philae’s feet were supposed to insert into the comet’s surface upon landing, thus anchoring the probe. However, the harpoons failed to deploy, so Philae bounced. The first bounce lasted two hours, in which Philae may have risen to a height of more than a half mile. The bounce was so long and high because the gravity of the comet is very feeble. The second bounce took only about seven minutes, and it wasn’t nearly as high. Finally, Philae landed, but it probably was a half mile from the intended and original landing site. Furthermore, it was perched precariously on a rock and in the shadow of a ledge or cliff.

That last detail is significant, because Philae is equipped with solar panels to provide power, but with so little sunlight reaching the panels, there was not enough power to run Philae’s instruments. Philae’s battery could provide power for only a couple of days, so ESA hurried some of the scientific experiments before placing Philae in sleep mode. The comet is on its way toward the sun. ESA hopes that next year, when the comet is much closer to the sun, the position of the sun in the sky around Philae will be more advantageous for solar power, and they can revive Philae, recover stored data, and continue the mission.

Even if Philae cannot be revived, Rosetta continues to orbit, and there are many other worthy experiments aboard Rosetta that are unaffected by Philae’s troubles. Besides a camera, there are several instruments that will analyze the composition of the comet’s nucleus, as well as the comet’s coma as it develops.

This is all good, observational science. This is the study of how the world now exists. Unfortunately, there are many news reports that discuss the Rosetta/Philae mission in terms of past processes. For instance, comets have organic compounds, so some evolutionary scientists think that comets delivered organic compounds to the early earth to help get life started. These scientists think that the study of this comet will shed light on the origin of life. Asymmetrical molecules, such as amino acids, come in two different forms that are mirror images of one another. We say that the molecules are either left-handed or right-handed. The amino acids essential for life are left-handed, though there is no reason why life does not use right-handed amino acids. One thing that scientists want to study is whether any amino acids in the comet have a preference for being right-handed or left-handed. Most evolutionists think that since amino acids on Earth came from comets, if we find any amino acids on the comet, they will be left-handed too. Of course, if they happen to find right-handed amino acids on this comet, that probably won’t shake their belief in evolution.

Previous Article Should Christians Explore Space? Next Article What’s Up for 2015