On January 5–9 I attended the 223rd meeting of the American Astronomical Society (AAS) near Washington DC. The AAS is the professional society for astronomers, and it has two general meetings per year. It allows astronomers to share news about recent developments in our science. When I attend an AAS meeting, I usually present a poster paper, normally in conjunction with my research partner, Dr. Ron Samec of Bob Jones University (BJU). This time, Travis Shebs, a recent BJU physics graduate, also attended, so we were able to present three poster papers. A poster paper is a way to share one’s work with colleagues at professional meetings. Typically we present preliminary work on eclipsing binary stars that we study, with a more detailed treatment later in a journal article. You leave a poster paper up all day in an exhibit hall for others to peruse at their leisure, but there is an hour or two reserved to stay near your poster to answer questions. In the photo you can see me standing between two of our poster papers: 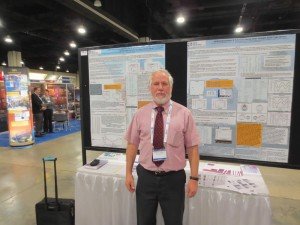 At the AAS meeting, I attended many oral sessions on extra-solar planets and the Cosmic Microwave Background (CMB). As a creationist, these topics are of interest to me, because evolutionists search for life on other planets and the CMB is the main evidence normally given for the big bang model. More than 30 years ago cosmologists began to believe in cosmic inflation, the idea that very shortly after the big bang the universe briefly experienced an expansion far faster than the speed of light. Inflation was invoked to explain the horizon and flatness problems in big bang cosmology. Inflation is now nearly universally accepted, even though there is no evidence that it happened.

Recently a few people have challenged my statements about the lack of evidence for inflation, claiming that discovery last year of B-mode polarization in the CMB proves inflation. I found it hard to believe that I had missed such an important discovery, so I was particularly excited to see that a number of oral sessions during the AAS meeting dwelt with this topic. All of the speakers mentioned that inflation still is a hypothetical idea without any evidence, but that the situation may change in the near future. I even went up after one session to talk to one of the speakers to make sure that I properly understood the situation.

Polarization refers to the direction that waves are vibrating. If there is a preferred direction, then we say that a wave is polarized. Electromagnetic radiation, such as makes up the CMB, can be polarized in two different ways. We call these two ways E-mode and B-mode polarization. Models of inflation suggest that gravitational waves in the early universe might have left imprints in the CMB in the form of B-mode polarization on large angular scales. But gravitational lensing at a later time can imprint B-mode polarization on the CMB, too, but on small angular scales. The latter was discovered last year, and apparently some people misunderstood and thought that this was evidence of inflation rather than gravitational lensing. With the expectation that B-mode polarization due to inflation may soon be discovered, I need to stay tuned to this. I don’t believe the big bang explanation, so the CMB must have some other source. It would be funny if all of the many studies of the CMB constraining the big bang model turned out to be spurious.

On the last day of the AAS meeting we went on a field trip to the Goddard Space Flight Center (GSFC). The purpose of the tour was to visit the building where they are constructing the James Webb Space Telescope (JWST). This telescope is scheduled for launch in 2018, and it will be a much larger replacement for the Hubble and Spitzer Space Telescopes. We saw some of the clean rooms where they do this work and also saw other facilities involved in assembling the JWST. Many of you have been impressed with the photos from the Hubble Space Telescope (HST), and the HST has been used to do some good astronomy, but the JWST will greatly exceed the HST. While at GSFC, I shook the hand of John Mather, winner of the 2006 Nobel Prize in physics. 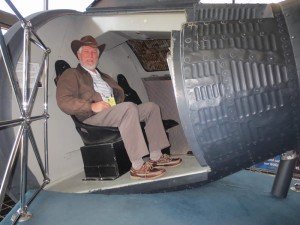 The Space Cowboy. Or is it Maurice? 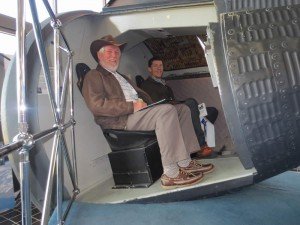 Finally, on Saturday Hugh Ross and I were guests on Up for Debate, a one-hour call-in show on Moody broadcasting. As you might guess, the subject was the big bang and whether Christians ought to believe it.

On the weekend of February 28–March 2, I’ll be participating in a fossil dig on the Peace River in Arcadia, Florida. This will be my third time on this annual trip.  On previous trips my wife and I found plenty of shark teeth, dugong ribs, some mammoth or mastodon vertebrae, and a mastodon tooth. The trip is sponsored by Creation Education Resources and will include much time with Dr. Gary Parker and his wife Mary. I’ll bring some telescopes, so we’ll also do astronomy either Friday or Saturday evening, depending upon weather. You can register by emailing cer@creationeducation.org.

Please keep visiting my blog—I update it once or twice a month, depending upon what is going on. I’ll keep you informed of astronomical events, activities at the Creation Museum, and my activities.