Featured in Evolution Exposed: Biology
Share:
Email Using:
Gmail Yahoo! Outlook Other
abiogenesis
the alleged spontaneous generation of living organisms from nonliving matter
adaptation
a physical trait or behavior due to inherited characteristics that gives an organism the ability to survive in a given environment
adaptive radiation
the process of speciation as populations spread and encounter different environments
allele
any of the alternative forms of a gene that occur at a specific spot (locus) in the DNA sequence (genome) of an organism
anthropic principle
life in our universe requires physical constants, laws, and properties that fall within certain narrow ranges; the universe appears designed to support life
anthropology
systematic study of the characteristics of humans through history
archaebacteria
the kingdom of prokaryotic cells, excluding eubacteria (considered as a separate domain in certain classification schemes), which is alleged to be ancestral to eubacteria by some evolutionists
Archaeopteryx
extinct species of perching bird (known from fossils) with teeth, wing claws, and a bony tail
Archaeoraptor
The Archaeoraptor [sic] is a fraudulent fossil from China that combined the body of Yanornis with the tail of a Microraptor.
artifact
an item or its remains produced in the past by humans; generally recovered through archaeological exploration
atheism
the belief that God, or any supreme intelligence, does not exist
Australopithecus
genus of extinct apes known from fossils found in Africa, including the famous “Lucy”
bacteria
a group of unicellular organisms that lack a true nucleus and membrane- bound organelles; including eubacteria and archaebacteria
baramin
(see created kind)
Bible
the collection of 66 books that is the inspired Word of God; used as the authoritative source for determining truth
biblical creation
the supernatural events, occurring over six approximately 24- hour days, described in Genesis 1 and 2, by which God caused the formation of the heaven and earth and everything in them
biblical creation model
a scientific model based on the biblical account of three key events—creation, the curse of nature brought about by Adam’s sin, and the global catastrophe of Noah’s Flood
big bang model
the cosmological model suggesting the universe began as a single point which expanded to produce the known universe
biology
the systematic study of the characteristics and interactions of living things
beneficial mutation
a mutation which confers a survival advantage to an organism under certain environmental conditions; usually a result of the loss of genetic information (see mutation)
catastrophism
the doctrine that changes in the geologic record are a result of physical processes operating at rates that are dramatically higher than are observed today
cell theory
a theory of biology consisting of three parts
(1) cells are the basic unit of all living things; (2) all living things are composed of one or more cells; and (3) all cells come from preexisting cells
chemistry
the systematic study of the properties and interaction of matter
clone
an organism that is genetically identical to its parent
cloning
producing a new organism using the DNA of an existing organism
cosmogony
a belief about the origin of the universe
cosmology
the systematic study of the structure of the universe, including its origin
created kind (baramin)
the original organisms (and their descendants) created supernaturally by God as described in Genesis 1; these organisms reproduce only their own kind within the limits of preprogrammed information, but with great variation

Note: Since the original creation, organisms of one kind cannot interbreed with a different kind, but individuals within a kind may have lost the ability (information) to interbreed due to the effects of the Curse.

Cro-Magnon man
an extinct people group of Europe and Eastern Asia
Darwinism
a belief that all organisms have a single common ancestor that has produced all living organisms through the process of natural selection; popularized by Charles Darwin in On the Origin of Species
day-age theory
a compromise belief that the days of Genesis 1 are actually vast ages of different lengths; based on secular dating methods
deism
a belief in a Creator God that denies His intervention in the history of the universe since its creation
DNA (deoxyribonucleic acid)
the basic molecule of hereditary information which serves as a code for the production of proteins and is common to all living organisms
endosymbiont hypothesis
the suggestion that mitochondria, chloroplasts, and other organelles originated as bacteria that were ingested and became a part of eukaryotic cells over evolutionary time
entropy (thermodynamics)
the measure of the tendency of closed systems to increase in disorder
eubacteria
the kingdom of prokaryotic cells, excluding archaebacteria (considered as a separate domain in certain classification schemes); alleged to be descended from archaebacteria by some evolutionists
evolution
all life on earth has come about through descent with modification from a single common ancestor (a hypothetical, primitive single-celled organism)
extrapolation
inferring information outside of the range of the actual data based on trends
faith
belief in things that cannot be directly known or observed
Flood (Noah’s Flood)
the supernatural event described in Genesis 6–10 that covered the entire earth with water, killing all land-dwelling, air-breathing animals except those aboard the Ark built by Noah
fossil
preserved remains or traces of once-living organisms
coprolite
fossilized excrement
included fossils
organisms that are encased in a substance leaving the specimen virtually intact, as in amber
living fossils
living organisms that are virtually identical to fossil organisms; often thought to have been extinct and then discovered
mold and cast fossil
a type of replacement fossil which includes the concave or convex impression of an organism; typical of shells and leaves
permineralized fossil
an organism in which the porous parts are filled with mineral deposits leaving the original superstructure intact
replacement (mineralized) fossil
organism whose entire structure has been replaced by mineral deposits so that none of the original superstructure remains
trace/track/micro fossil
evidence of the activity of an organism, including tracks, burrows, root traces
fossilization
the process of preserving the remains or traces of an organism, generally by some form of petrification
gene
a segment of DNA that codes for the production of polypeptides
gene pool
the collection of varying alleles within a population of organisms
genetics
the study of characteristics inherited by the transmission of DNA from parent to offspring
genome
the complete set of genetic material (DNA) of any cell in an organism
geocentric
using the earth as a central frame of reference
geologic column
the layers of rock that compose the crust of the earth
half-life
the amount of time required for one half of the atoms of the parent isotope to decay into the daughter isotope
heliocentric
using the sun as a central frame of reference
heredity
acquiring traits by transfer of genes from parent to offspring
historical (origins) science
interpreting evidence from past events based on a presupposed philosophical point of view
historical theory
an explanation of past events based on the interpretation of evidence that is available in the present
hominid
extinct and living members of the family Hominidae, including modern humans and their ancestors
Homo erectus
fossils of extinct human people groups that are misinterpreted as missing links in human evolution
Homo habilis
an invalid category consisting of various ape and human fossil fragments
homologous structure
any feature that shares a common design with a similar feature in another species of organism (alleged to support common ancestry in evolutionary models)
Homo sapiens
the category that includes modern humans, Neanderthals, and other extinct human groups
human
any member of the species Homo sapiens
humanism
a belief in mankind as the measure of all things; based on relative truth and morality and rejecting any supernatural authority
Ice Age
the period of glaciation following Noah’s Flood during which a significant portion of the earth had a cold climate
information
an encoded, symbolically represented message conveying expected action and intended purpose
interpolation
inferring information within the range of the actual data based on trends
Java man
the first fossil specimen of Homo erectus
Kennewick man
human remains found in Washington State in 1996
kind (see created kind)
life (biological)
anything that contains genetic information, can reproduce offspring that resemble itself, grows and develops, controls cellular organization and conditions including metabolism and homeostasis, and responds to its environment

Note: Vestigial organs include eyes in blind cave-fish but not organs that are assumed to have had a different function in an unknown ancestor.

virus
a nonliving collection of proteins and genetic material that can only reproduce inside of a living cell
Y-chromosome Adam
the most recent common ancestor whose lineage can be traced backwards through male ancestors
Previous Chapter Introduction Next Chapter What Is Science? 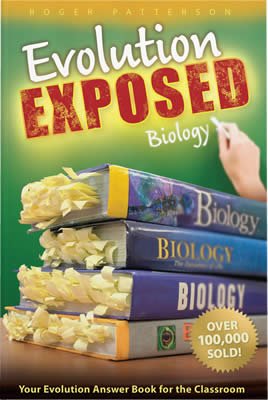