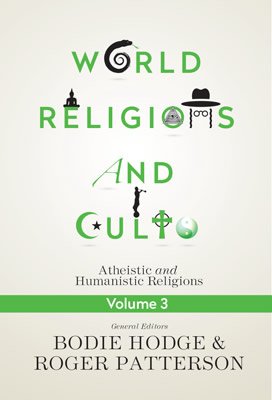 This final book in the series focuses on the atheistic or humanistic type of religions. It would be one of the most valuable for the church in the Western World where anti-god and pro-evolution religions are beginning to explode, for it was written to refute those religions and show how they fail.

Extremely valuable for the church in the Western World where anti-god and pro-evolution religions are beginning to explode. Unlike most books on world religions, this title dives into the secular humanistic realm. All three volumes start with God’s Word as the absolute authority. In doing so, God becomes our guide to refute false religions.

Christianity is on the decline in the US. However on college campuses and in society at large, the influences of Eastern religions like Hinduism, Taoism, New Age, Sikhism, Confucianism, Shinto, Buddism, and even Witchcraft, Voodoo, and Greek Mythohlogy are exploding. Understanding the basic tenants of these religions helps the Bible believer see their flaws. In this way, one can better discern how to be an effective witness for Jesus while standing firm on the authority of the Bible.