The world’s largest Christian music festival starts Monday at the Ark Encounter in Williamstown, Ky., south of Cincinnati. The large-scale event called 40 Days & 40 Nights* of Gospel Music at The Ark will run August 2—September 10, 2021, with multiple concerts daily, well-known speakers and opportunities to experience everything the popular Ark Encounter attraction has to offer.

40 Days & 40 Nights of Gospel Music at The Ark will feature the largest talent roster of any Christian music festival in the world.

Ham declares: “Millions of people across America love gospel music. Abraham Productions and the Ark Encounter are offering a unique combination of award-winning groups, with a range of music styles like Southern gospel, country, contemporary Christian music, and bluegrass, all coming to the world’s leading Christian themed attraction. The Ark is also the number one attraction in Kentucky as determined by Attractions Magazine.”

This is the first time the Ark Encounter has hosted a major musical festival.

This is the first time the Ark Encounter has hosted a major musical festival. Abraham Productions is the organizer and promoter, well known for producing large gospel music events such as “Singing In The Sun,” a 6-day event with 30 major artists and national speakers, taking up the entire 250,000 square foot Myrtle Beach Convention Center in Myrtle Beach, S.C. “Singing In The Sun” attracts people from more than 45 states and several countries.

“I expect that 40 Days and Nights at the Ark now will be our largest-attended music event to date,” said Ray Flynn, president of Abraham Productions. “I’m praying it will draw well over 100,000 people to the Ark. We expect many guests will come for more than one day, so the final attendance might end up being even higher.”

During the 40 Days & Nights of Gospel Music at the Ark, concerts will be held in the mornings at 10 a.m., with the main event at 5 p.m.—taking place in the state-of-the-art Answers Center near the massive ship. Music will also be presented daily in Noah’s Village nearby, and at 2 p.m. several opportunities will be offered to hear dynamic presentations from Ken Ham and even more gospel music in the Center. 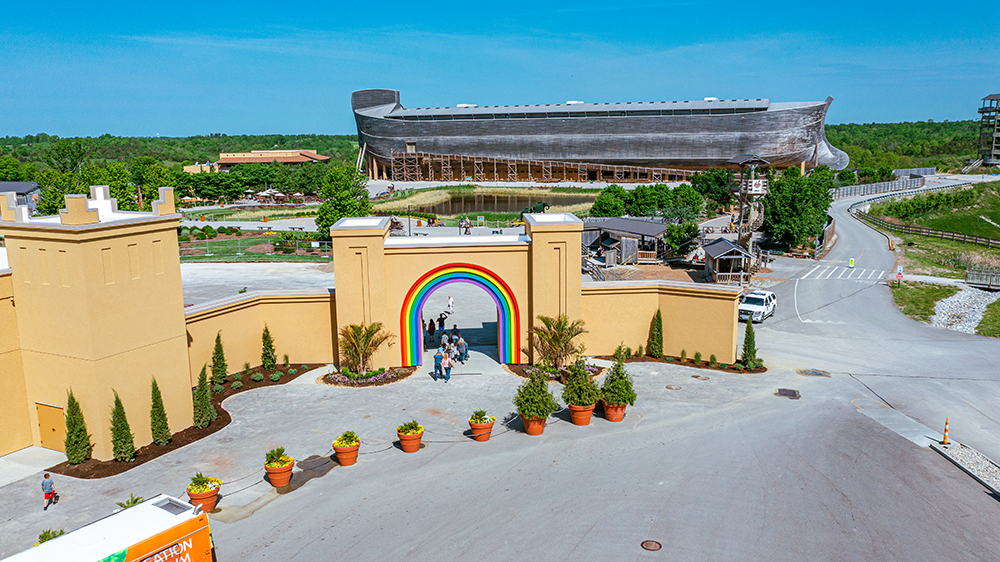 Daily admission to the Ark Encounter gives free access to all the concerts and speakers and allows guests to explore the Ark, which at 510 feet long is the largest timber-frame structure in the world. Built according to the dimensions given in the Bible, the Ark features three decks of striking teaching exhibits. Other attractions include the live animal Ararat Ridge Zoo, a new Virtual Reality Experience, movies, family playground, ziplines, family dining at Emzara’s Kitchen, gift shops and more.

Ham, founder of the ministry Answers in Genesis which owns and operates the Ark Encounter, declared: “As a big fan of gospel music, I’m thrilled our world-renowned Ark attraction will be hosting this highly ambitious music festival. We expect to welcome visitors from all over the country and even abroad.”

Admission prices, discounts, annual passes, hotel information and additional details are available at 40DaysOfGospelMusic.com. Tickets can be purchased through ArkEncounter.com and AbrahamProductions.net or by calling the Ark Encounter toll-free at 855-284-3275.

Abraham Productions, Inc., was founded in 1998 and is one of the largest and most-respected concert production companies in the gospel music industry.

Answers in Genesis is an apologetics (i.e., Christianity-defending) ministry based in northern Kentucky, near Cincinnati. The Ark Encounter opened in 2016. Its sister attraction the Creation Museum (west of the Cincinnati Airport and next to the AiG headquarters) has also become a major family attraction in the Midwest. For more information on the two attractions, visit CreationMuseum.org and ArkEncounter.com.

*“40 days and 40 nights” is the well-known phrase from Genesis 7:4 of the number of days it rained during Noah's Flood.