A bedrock belief of evolutionary geologists has been convincingly undermined today with the publication of ground-breaking Grand Canyon research conducted by geologist Dr. Andrew Snelling of Answers in Genesis (AiG).

A scientist with the highest credentials, Dr. Snelling spent more than four years studying layers in the walls of Grand Canyon in Arizona, especially where those rock layers are not lying flat but are folded. Dr. Snelling, a creationist, has just released his stunning findings in the peer-reviewed Answers Research Journal. His research helps confirm a rapid formation of those massive Canyon layers and contradicts the belief that they were formed over millions of years, as is commonly accepted by geologists. His in-depth paper can be found at https://answersingenesis.org/geology/rock-layers/petrology-tapeats-sandstone-tonto-group/.

Throughout Grand Canyon, thick rock layers appear which are smoothly bent (some close to being at a right angle—see photo). Dr. Snelling observes, “Normally, solid rock cannot bend without breaking, so this leaves only two options for bending: either the rock layer was bent while still soft, shortly after being deposited by water, or after the layer had fully hardened, it was bent by pressures which made the rock plastic, like playdough. Geologists who believe the layers were laid down over millions of years accept the latter option.” 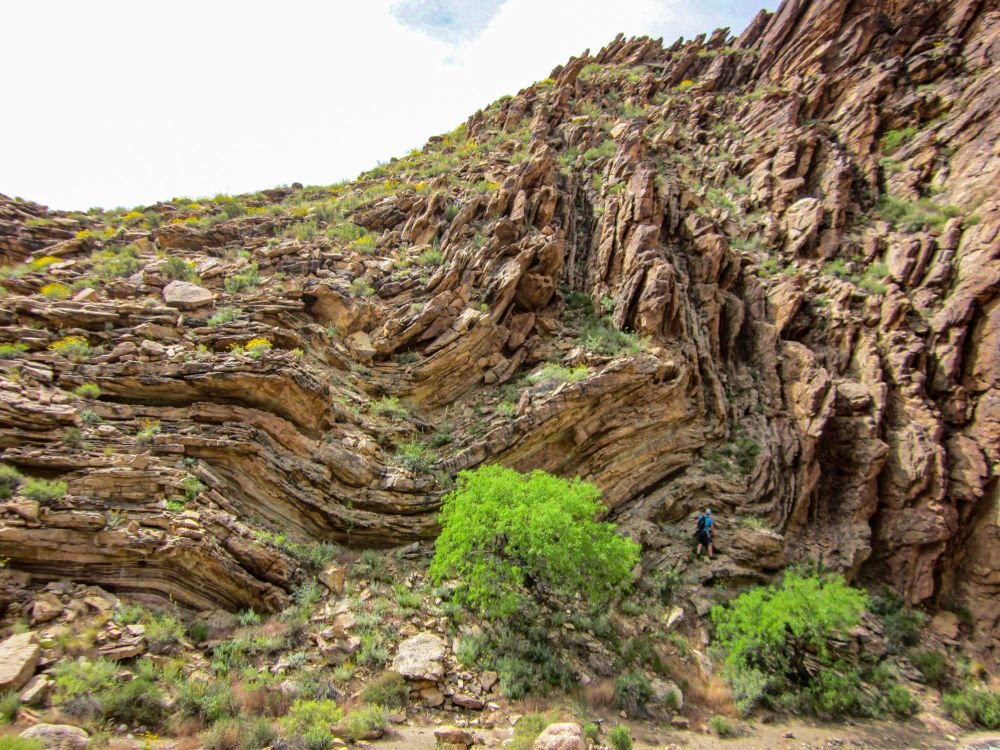 The massive Carbon Canyon fold, with the rock unit bent 90 degrees (Note the person in the photo for scale.)

Dr. Snelling points out that for hardened rock to bend without breaking, it must undergo metamorphic changes in its mineral content and structure, including at the microscopic level. At the outset of his research, his question was this: Is there any evidence of the hard rock in the bent layers being metamorphosed?

Dr. Snelling examined samples from two prominent folds in Grand Canyon. His research concluded: “By comparing the Tapeats Sandstone samples from the folds with other Tapeats Sandstone samples located far from the folds, no metamorphism has occurred. Therefore, our four-year research project confirms that these rock layers were bent while they were still soft, after rapid deposition.” Dr. Snelling also concludes, “This is tremendous evidence that the Canyon’s rock layers were laid down during a massive flood and subsequently bent before any of the layers had hardened.” Dr. Snelling suggests this evidence is consistent with the effects of Noah’s flood and its aftermath.

The “uniformitarian” argument—namely, that the layers of rock (or “strata”) at huge canyons like Grand Canyon were laid down over millions of years—has been powerfully challenged by this seminal study of rocks Dr. Snelling personally collected inside the folds of the Canyon.

Dr. Snelling declares: “Observational science tells us that rock layers must be soft when they fold. But over the supposed 450 million years, how could they possibly have remained soft until they were then bent?”

The quandary now for those who argue for millions of years for the Canyon’s layering is this: How could these hard layers, which were bent supposedly 450 million years after they formed, not shatter during the bending process? Dr. Snelling declares: “Observational science tells us that rock layers must be soft when they fold. But over the supposed 450 million years, how could they possibly have remained soft until they were then bent?”

Ken Ham, CEO and founder of AiG, states: “Dr. Snelling’s monumental research confirms what should be obvious to all geologists: such folds must have been formed relatively quickly before the thick rock layers hardened. It’s a major blow to long-age geologic thinking.”

Dr. Snelling, with an earned doctorate in geology from one of the world’s leading institutions, the University of Sydney, had long recognized that more creationist research in geology was needed to explain the formation of the massive layers exposed in canyon systems around the world—and whether they could be explained catastrophically (e.g., massive flooding) as opposed to the dogma of uniformitarian long-age thinking. (The arguments for a global flood, including from Dr. Snelling’s decades of research, are presented at AiG’s attractions, the Ark Encounter and Creation Museum.)

The evolutionists’ story about the formation of Grand Canyon in northern Arizona is that the rock layers at the Canyon were laid down over very long ages. Then the Canyon was carved through them over millions of years by the slow erosive powers of the Colorado River. Because of their dogmatic thinking, officials and academics associated with Grand Canyon National Park tried to prevent Dr. Snelling from conducting this study, expressing disdain in emails about his religious and creationist beliefs. In 2017, international media reported that Dr. Snelling finally received the research permits he had first requested from the park in 2014 so that he could continue his field work inside the Canyon. Presented with the clear-cut, documented evidence of an anti-Christian bias in the permits’ denial, the Departments of Justice and the Interior agreed; the Grand Canyon National Park changed course and issued Dr. Snelling’s research permits.

Ham hailed Dr. Snelling’s research: “This scientist with top credentials has offered powerful new evidence of the rapid formation of Grand Canyon’s layers during the global flood of Noah’s day followed by the Canyon’s quick formation. His superb work exemplifies AiG’s ongoing original research, conducted by full-time PhD scientists from renowned institutions who have published in leading science journals. Our faculty also work in other fields such as genetics, paleontology, and astronomy to help confirm the Genesis account of origins as well as Noah’s flood.”

Dr. Snelling collected rock samples on a research trip through the Grand Canyon in August 2017 in order to investigate the nature of the folding of strata in the Canyon. Dr. Snelling stated: “The Tapeats Sandstone is a formation 30–100 meters thick that prominently outcrops through the walls of Grand Canyon for about 500 kilometres. Erosion of the underlying Precambrian basement rocks produced what’s well known in geological circles as the ‘The Great Unconformity,’ upon which the Tapeats Sandstone was deposited. The Great Unconformity, in fact, has been traced across several continents.”

Dr. Snelling added, “The mineralogical content, textural features, sedimentary structures, continental-scale deposition, paleocurrent directions matching continental patterns, and even the tracks and traces of transitory invertebrates all indicate rapid burial and are consistent with the catastrophic erosion of the Great Unconformity near the initiation of the global Genesis Flood cataclysm, only about 4,350 years ago.”

Dr. Snelling is a member of eight professional geology groups. One of his prior research projects included a study at the Koongarra uranium deposit in Australia. Dr. Snelling is also the author of the two-volume Earth’s Catastrophic Past and hundreds of articles on geology. Several more articles are to come on Dr. Snelling’s original research at Grand Canyon.

Answers in Genesis is an apologetics (i.e., Bible-affirming) ministry based in northern Kentucky. Its Ark Encounter opened in 2016 and features a 510-foot-long Noah’s ark. West of the Cincinnati Airport and next to the AiG headquarters, the Creation Museum has also become a major family attraction. Both venues are experiencing huge crowds this month, with some record-setting days.