Creation Evangelists in the Most Unlikely of Places

When Mt. St. Helens blew its top on May 18, 1980, Lloyd and Doris’s lives seemed largely unaffected, aside from the falling ash that disrupted traffic near their Seattle home. Fifteen years later, however, their lives would take a completely new turn in the fallout of the eruption.

The couple had always believed the Bible’s account of six days of creation, but like many Christians of the time, they also held to the gap theory (the belief that most fossils were formed during a prior catastrophe that supposedly occurred between Genesis 1:1 and 1:2). Then at a creation conference in the 1990s, they learned about the gap theory’s inconsistencies. That ignited a fire in Lloyd to share the truth about God’s creation and global judgment during the Flood. 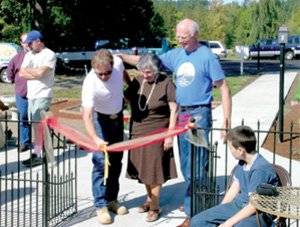 For over ten years, Lloyd and Doris Anderson (left) have devoted their lives to an evangelistic outreach known as the 7 Wonders Creation Museum, located near the famous Mt. St. Helens volcano.

A visit to Mt. St. Helens in 1996 gave direction to Lloyd’s passion. Doris suggested they retire there and open a facility where they could share the Bible’s truths with tourists and school groups. The next year, while trying to find a location, Doris recalls, “The rain stopped and a giant rainbow spread in brilliant color across Spirit Lake Memorial Highway, pointing to our new home and the future 7 Wonders Creation Museum.”

Since the museum’s opening over ten years ago, thousands of visitors have stopped by to see their displays, including the centerpiece: seven rapid geological changes caused by the volcano’s recent eruption. Scientific observations in the present should make us “wonder” how quickly the earth could have changed in the past.

Admission to the museum is free. It is a labor of love supported through donations and book sales. (They offer the largest selection of creation books and DVDs of any bookstore in the northwestern U.S.)

At times, Lloyd can be spotted tramping around the volcano monument, leading guided tours. At other times he is excitedly giving lectures in the museum auditorium.

As the years roll by, Lloyd and Doris are making plans for others to carry on their vision—proclaiming that we can trust God’s Word in every detail, from its account of creation in six days and the global Flood to the promise of salvation through Christ’s work on the cross.

Previous Article Believe It or Not: Design in the Smokies!