New Display: Art and the Bible at the Creation Museum

Visitors to the Creation Museum will be able to view an amazing new collection of historical Bible manuscripts and artifacts in the popular Verbum Domini (“The Word of the Lord”) exhibit. Representing only a small portion of the famed Green Collection, the items in this exhibit are rotated out about every six months. “Art and the Bible,” the new display which opened yesterday, focuses on the stunning artwork to be found in biblical artifacts. 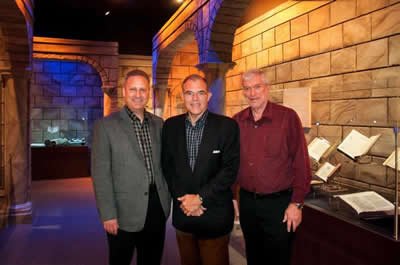 In ancient times, Christians relied on images to convey the accounts of the Bible and the deeper meaning of those accounts to people who could not read them for themselves. As more people were able to read, pictures were still used to adorn the Bible and to help people connect with the narratives on a deeper, more human level. Today, art is overwhelmingly absent from Bibles, but, for the majority of the history of Christianity, the opposite was true. The most important Bibles were the ones that were the most extensively decorated.

From the beautifully illuminated manuscripts of the Middle Ages to the intricately engraved Bibles of the 19th century, the process of illustrating the Bible is a challenge that has attracted many of the most famous artists throughout history. Though the style of the art changed depending on the time and place the Bible was made, the scenes depicted and the themes conveyed remain familiar.

Just in time for Christmas at the Creation Museum, one of the themes featured in the new Verbum Domini exhibit is the Nativity. Depicted in items spanning four centuries in Verbum Domini, museum guests can see how the subject matter of the Nativity has changed over time. Baby Jesus, Mary, and Joseph are present throughout, but early depictions of the Nativity focused on the Magi while later portrayals featured the shepherds and their animals. From hand painting to woodcut images and even prints of illustrations by Rembrandt, the Nativity comes to life in these wonderful works inside the Creation Museum.

Christ’s Crucifixion and Resurrection are central images of Christian art. The section of Verbum Domini called “Even Death on a Cross” displays articles from four countries and three different centuries. Despite the cultural and chronological differences of these works, the visitor will appreciate the depth of detail and sense of movement the artists were able to engender in their work. An especially intriguing piece is an original woodblock used to illustrate the first Arabic printing of the Gospels.

God created the universe ex nihilo (“from nothing”). What did that look like? The section “In the Beginning God Created the Heaven and the Earth” demonstrates the various ways artists have portrayed Creation. Some of the illustrators show what was formed on each day of Creation Week. 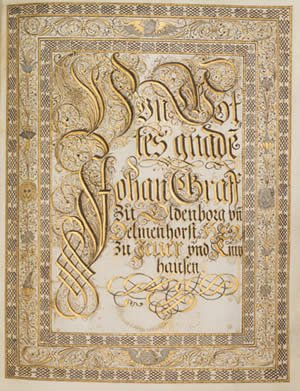 A Gold and Silver Calligraphic Psalter in the German Translation by Martin Luther, illuminated by Nicolaus Selneccer in Germany in 1592. Photo by Ardon Bar Hama. (Click the image to see a larger version.)

The focus of the final display in Verbum Domini recognizes how beauty is to be a component of our worship. Psalm 96:9 declares, “O worship the Lord in the beauty of holiness: fear before Him, all the Earth.” Embracing this idea, texts used for personal devotions are often beautifully decorated. The Psalters—the devotional of choice for Christians of the Middle Ages—displayed are ornately illustrated. The Esther scrolls, used by Jews for family Scripture reading, show that this practice has continued through the ages.

In this exhibit you will see Bibles that have been illustrated by artisans from the best workshops of medieval Europe, master painters and engravers of the Early Modern period, and contemporary artists from around the world. We hope that through this exhibit, guests will be moved by the beauty and skill of the artists’ work and come to develop a renewed appreciation for the relationship between art and the Bible.

The Green family has purchased property in Washington DC and plans to construct a museum near the Capitol to showcase their collection of over 40,000 antiquities. In a few years, guests to America’s capital will have the opportunity to see one of the largest biblical exhibits in the world! In the meantime, Creation Museum guests and members can enjoy a new exhibit every six months.

Editor’s note: Portions of this article were adapted from material sent to the Creation Museum by the Green Collection.