"The Heretics Are Coming!"

Some 2,000 years ago, the Apostle Paul and his fellow believers came to Greece and, as some historians described it, ‘turned the world upside down.’ Today it is happening again.

No, it’s not the earthquake in Greece that you may have heard about—that was 40 miles outside of Athens, and no-one in our AiG/Gospel Literature Services group was bothered by it. It’s another “earthquake” that has shook up Athens during the Olympic Games.

We were told this morning that the AiG/GLS group, which has been in Athens actively sharing their faith and distributing gospel materials, is a part of the largest evangelistic group in history to ever come to Greece.

Just as in Paul’s day when he had challenges in his Greek ministry, so have we. First, the group traveling through New York had a much longer time to get to Athens. Due to bad weather in New York, our flight was delayed. This caused us to miss our connecting flight in Frankfurt, Germany. After arriving in Germany, our group was too large to be put on the next flight to Athens, so we had to spend an additional five hours waiting there.

But God turned these two delays into a blessing. The team was able to hand out gospel literature at both airports. What a blessing it was to see men and women reading AiG materials in both the New York and Frankfurt airports.

It was with great joy, even at 1:30 am, that we finally arrived at the camp where we will be staying near Athens for the next week. At the same time, we were greeted with a headline in one of the local newspapers that read “The Heretics are Coming!” Unfortunately, many people in Greece are not happy to see this influx of Christians who are openly sharing their faith.

When we remember how Paul and the other apostles suffered for their faith, we are embarrassed to even compare our difficulties to them. No-one here has been beaten up for their faith or pulled into a stadium with a mob of 20,000 angry people calling for their death. Instead, we are seeing many international visitors to Greece—and the Greek people—being presented with the gospel.

I have to admit to you that I am a little disappointed over one thing, though. AiG staff members Dan Zordel, Diane King and Vicki Eggert—who worked very hard for months to make this ministry opportunity happen—couldn’t be here to see the fruits of their labor. Also, many AiG supporters who have prayed for our team and have financially supported us also couldn’t be here to see the same fruit. 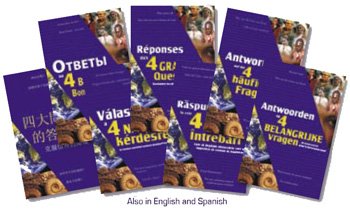 Over the months, our team was able to get AiG’s Answers to the Four Big Questions translated from English and printed into eight languages, praise God. These are also available online.

Our group has already seen many blessings, and it has been a blessing itself. We got back to our rooms last night at 2:00 am after our first day of street evangelism. Seven people received the Lord as their Lord and Savior. After only a few hours of street evangelism, we’re pretty amazed.

Please continue to pray for this outreach.