A weighty message even a child can understand!

After a recent children’s workshop in Houston, Buddy Davis (AiG speaker and dinosaur sculptor) was handed an astonishing little “storybook” (reproduced below), drawn by one of the children who attended. Out of the many things that Buddy talked about, this child really grabbed the main point. It’s the key to reaching the next generation. . .

God created a perfect world that was marred by Adam’s sin.

Why is this so important? It strikes at the heart of secular humanism. The foundation of humanism is the belief that disease, bloodshed and violent death-as revealed in the fossil record-have been around for millions of years, and so it’s impossible to believe in a God of love who supervises the world. But the Bible teaches that death and suffering came after Adam’s sin, just a few thousand years ago. God is not responsible for all of the horrible things that we see in the fossil record, but they all began because Adam sinned.

The thing that excites us so much is that even children can understand this point. The message is getting through. The more we can get future generations to understand that death is a consequence of sin, the more that we can erode the foundations of humanism and restore a Biblical foundation.

The Bible’s message is designed for all ages. Jesus Christ Himself “rejoiced in spirit” because children understood His message (Luke 10:21), and He broke out into this prayer of thanksgiving: “I praise You, O Father, Lord of heaven and earth, that You have hidden these things from the wise and intelligent and have revealed them to infants. Yes, Father, for this way was well-pleasing in Your sight.” 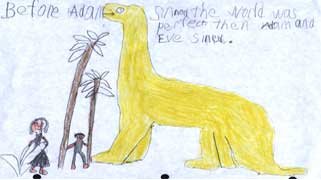 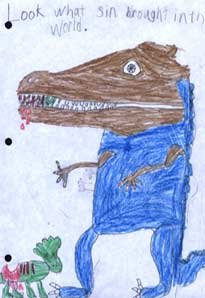 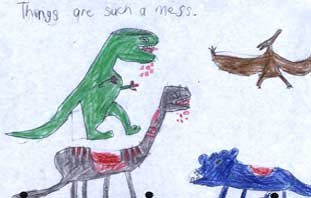 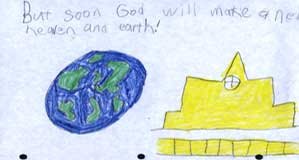 Scene 1. Big yellow dinosaur, tall trees and Adam and Eve (all smiling).
Caption: “Before Adam sinned the world was perfect, then Adam and Eve sinned.”

Scene 2. Big blue dinosaur (blood dripping from its teeth) standing over a small green dinosaur (bite taken out of its back).
Caption: “Look what sin brought in the world.”

Scene 3. Several dinosaurs, all with blood in their mouths and bite marks.
Caption: “Things are such a mess.”

Scene 4. A new Earth and a city of gold (heaven).
Caption: “But soon God will make a new heaven and earth.”

This is, in essence, the very same message that AiG wants to proclaim with its Creation Museum and that we share with families worldwide through the quarterly Creation magazine. Every issue of Creation includes a colorful children’s section-Answers for Kids, whose mission is “helping children defend their faith.”

God’s Word still changes lives, even through the mouths of children: “Out of the mouth of babes and sucklings thou hast perfected praise” (Matthew 21:16), Christ said.

Do you know anyone who needs to hear this life-changing message?