An Article That’ll “Blow Your Mind”

The article “Missing or misinterpreted?” by Ken Ham, for example, piques readers’ interest with a series of circle illustrations and then shows them in a memorable way the influnce of assumptions.

The question sounds simple enough. Look at two pieces of a circle (illustration 1), and decide “what’s missing” from the options A to F (illustration 2). But the answer could forever change how you see the world.

The new article in Creation magazine—“Missing or misinterpreted?”—makes a profound point in words that even a child can understand. Yet by grasping the solution, that “child” will be equipped to answer the most basic questions plaguing modern man.

That’s what Creation is like. Issue after issue, readers are confronted with answers to profound questions … in simple language that reaches the heart of a child, as well as the head of a philosopher.

No wonder that avid readers from over 140 countries subscribe. Frequently they also order dozens of gift subscriptions for doctor’s offices, friends and acquaintances, because they’ve seen how the beautiful graphics and intriguing articles reach people.

The articles have a proven track record of changing lives and “blowing minds.”

These articles do the crucial work of “pre-evangelism,” breaking down barriers (“casting down imaginations,” as Paul says in 2 Corinthians 10:4–5) that prevent modern, secularized people from recognizing the authority of God’s Bible and heeding His saving gospel.

The article “Missing or misinterpreted?” by Ken Ham, for example, piques readers’ interest with a series of circle illustrations (illustrations 1 and 2 above), and then shows them in a memorable way (illustration 3) that it’s not what we see that leads us to believe that the world is millions of years old, but it’s our assumptions.

As the article says, simply but profoundly, “Whenever you hear a news report that scientists found another “missing link” or discovered a fossil “millions of years old”—try to … question the questions these scientists asked to get their interpretations!”

Ken’s article (like all the other articles in Creation) is filled with exciting, practical examples from real science—such as (1) the recent discovery of “living fossils”—Wollemi pines—in Australia, (2) the discovery of red blood cells in T. rex bones, and (3) the discovery that fishermen in Southeast Asia have been catching and eating coelacanths for years, though scientists had earlier assumed that coelacanths predated humans by 65 million years (based on false assumptions because coelacanth fossils and human bones don’t appear at the same place in the fossil record).

In addition to “Missing or Misinterpreted?” the latest issue of Creation features lots of other cool, eye-opening articles: 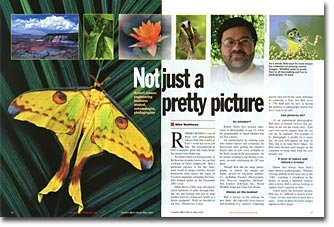 Not just a bunch of “pretty pictures,” but cutting-edge truths designed to change lives. Don’t miss a single issue!

If you want to “blow your mind” with the latest developments in defending the Bible and understanding God’s world from a biblical and scientific perspective, then subscribing to Creation is a must. You won’t regret your decision … guaranteed.

While you’re at it, buy a gift subscription to blow someone else’s mind!