Correcting the Bow and Stern Confusion

In recent months, we have received numerous comments about the large bow fin on the roof of our life-size Ark in Northern Kentucky and the stern projection on the opposite end. These questions have been asked on the Ark Encounter Facebook page, via email correspondence, and directly to me.

We have several articles explaining and defending the design of these two objects and why we believe Noah’s Ark may have included structures like these. The primary function of the bow fin and stern projection is to help the Ark point into the waves and reduce the likelihood of it turning side-on into the waves, which is worse for the passengers.

Some people who are interested in the Ark and are somewhat familiar with naval terminology have expressed concern over our labeling of these structures, believing we have confused the front from the back of the Ark. One gentleman wrote to us and kindly asked about our labeling of the bow and stern. He included the following definitions:

Bow: the forward part of a ship. Also called going "for'd."
Stern: the back part of a boat or ship. Also known as "aft." 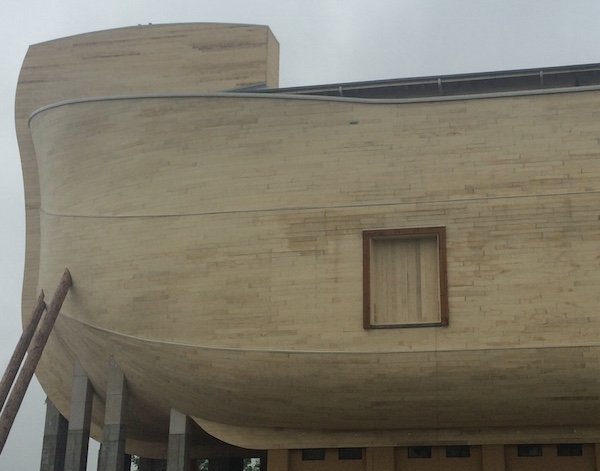 The front (bow) of the structure at Ark Encounter is pictured above, while the back (stern) is below. 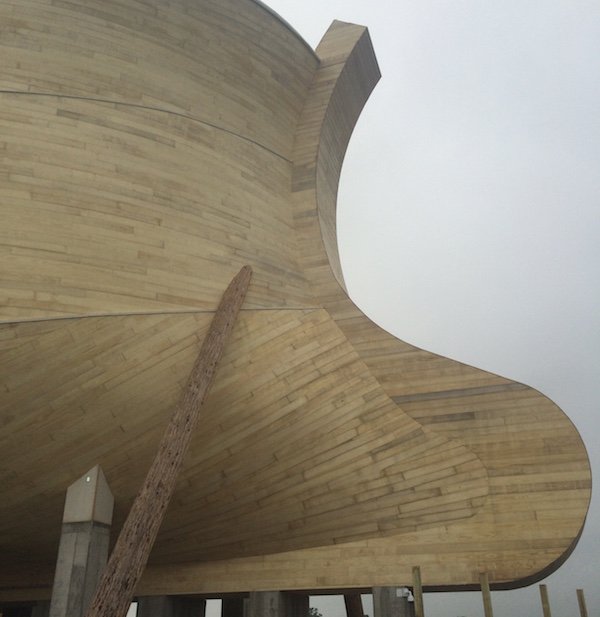 Defining the terms in this way is helpful because they provide the solution to the dilemma. We just need to dig a little deeper.

Because the bow fin is not a moveable sail, it is not built for navigation or propulsion purposes. In fact, our design for the Ark does not have any built-in method of propulsion. Since the bow fin and stern projection would point the Ark into the waves, and since the Ark has no self-propulsion, it would be pushed by the wind and waves so that it would actually float in the same general direction as the wind and waves. That is, rather than being pushed through the waves by a motor or oars, the Ark would be carried along with the waves.

This means that the leading edge of the Ark is actually the side with the large, rigid sail, which is why we have called this end the bow. The trailing end of the Ark would have the stern projection in the water to help catch the water and keep the Ark turned into the waves.

So even though it may seem as if we have confused the bow and stern, we have labelled them accurately according to the direction the Ark would travel, because it has no means of self-propulsion.

Here are two more possible reasons for the confusion. The first is that the stern happens to look a bit like a modern bulbous bow, which reduces drag when travelling the other way. The second is that modern ships are often seen driving bow first into a storm. However, with a sailing ship it is impossible to head directly into the weather. I hope this response has brought clarity to the issue.