Editor’s note: The following is a news release, slightly adapted, that was distributed to the national media.

The observation area to view the Ark’s construction is now closed, but the park will be open to the public on July 7, 2016. Plan your visit to the life-size Noah’s Ark.

As construction progresses on the life-size Noah’s Ark in northern Kentucky (to open in 2016), tourists who are in the region to visit places like the Creation Museum of Answers in Genesis now have a second fascinating AiG attraction to see: the building of the 510-foot-long Ark in Williamstown, south of Cincinnati, at a theme park called Ark Encounter.

Now that the dust from the massive excavation has settled and the lumber and timbers have arrived for the Ark, the general public will have the opportunity to visit the massive Ark Encounter construction site this summer in scenic northern Kentucky, at exit 154 off busy I-75.

Ken Ham, AiG president, stated: “Visitors will have the thrill of witnessing firsthand the historic construction of Noah’s Ark, being built according to the biblical proportions described in Scripture. Our guests will safely observe the Ark from a viewing spot just outside the actual hard-hat area. It will be their once-in-a-lifetime opportunity to see an Ark being built, which will become the largest timber-frame building in the world.” 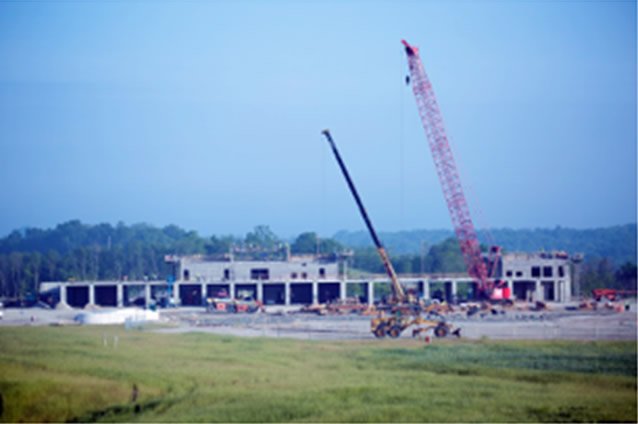 The view today from the newly opened Ark observation area. Large cranes are ready to lift wooden beams and place them onto the Ark’s foundation piers.

From this vantage point, Ark visitors will be able to watch the crews assemble the support towers this month, and over the next few months see the placement of lumber and timbers in sections called bents (or “ribs”) on the Ark foundation.

Tickets are required for this viewing opportunity. The cost is $20 per vehicle or $10 per vehicle for Creation Museum members. The small admission fee helps cover staffing and to maintain a safe environment. Ark Encounter Boarding Pass members are admitted free, though are asked to call ahead (800-721-2298). Because of a lack of turnaround space, no RVs or buses are allowed.

Museum and Ark members, plus anyone else wanting to purchase Ark viewing tickets, may pick up tickets at the Creation Museum guest services counter or at the Ark entrance itself. All interested Ark visitors are encouraged to go to the website as they make their plans. The observation area will be open seven days a week from 11:00 a.m. until 5:00 p.m. (Some restrictions apply—for example, on June 19 and August 7 the site will be closed to the general public; also, bad weather may prevent entry.)

During 2015, and in honor of the upcoming Ark Encounter, the Creation Museum is having a 2 Buy 2 promotion. The phrase alludes to Genesis 7:9, which describes the animals entering the Ark “two by two.”

Families that purchase two museum general admission tickets will receive two or more free admission tickets of equal or lesser value this year. This special program will allow more family and friends to experience the state-of-the-art 75,000 square foot museum, which brings the pages of the Bible to life. (Note: All tickets received from this promotion must be used on the date of purchase; other rules and restrictions apply.)

Meanwhile, AiG’s federal lawsuit against the state of Kentucky for engaging in unlawful religious discrimination is still in the courts. Last year, AiG was granted preliminary approval for a rebate of future sales tax collected at the attraction if attendance is high. After pressure from secular groups, Gov. Steve Beshear led the state to reverse its decision. Although the popular rebate program has allowed many other tourist-attraction developers to qualify for a gradual rebate of a portion of new state sales taxes their projects generate, AiG’s lawsuit explains that its application for the incentive program has been blocked by state officials simply because: 1) of the Ark project’s religious messaging; and 2) of the intention of AiG to utilize religious preferences in hiring at the Ark. A video that explains the suit’s background and dispels several myths about the project (e.g., that state taxpayer money is helping to build the Ark), is posted at https://AnswersForFreedom.org.