From the Beginning of Creation

This is Ken Ham, coauthor of the eye-opening book on Noah’s flood, A Flood of Evidence. 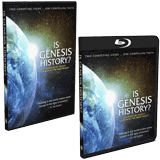 Sadly, many Christians today believe Darwin’s ideas about origins. But they don’t match with what the Old or New Testaments teach!

Now, evolutionists believe that humans didn’t evolve until very, very late in history. So for most of their history, humans didn’t exist. This is the exact opposite of what Jesus taught when he affirmed that Adam and Eve were created at the beginning of creation.